Malcolm Turnbull has no mandate by Phil Golby 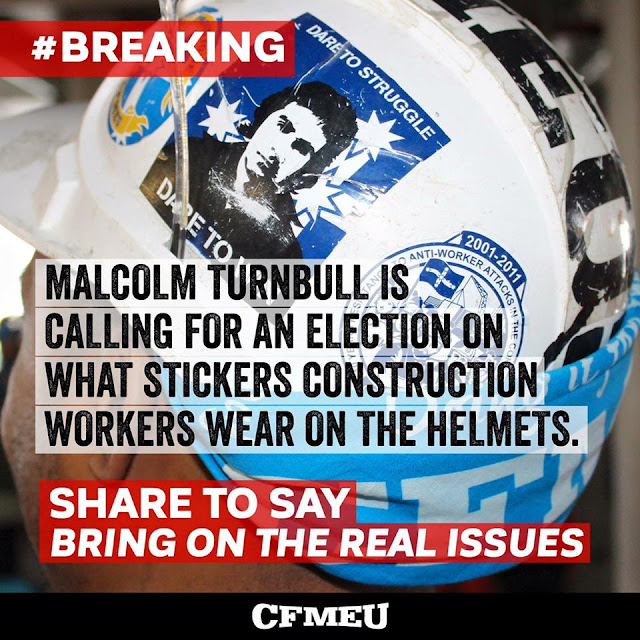 Malcolm Turnbull's very slim majority is no mandate to re-introduce the Australian Building and Construction Commission (ABCC) and other anti-worker legislation that he could not get through the previous Senate.
The silence from the government was deafening during the election campaign, even though the ABCC legislation was the trigger. The ABCC was hardly mentioned. It only highlights the fact that Turnbull did not want to give the average worker the opportunity to scrutinise the finer details of his proposals to attack workers' rights.
Turnbull and the Coalition want to reintroduce Work Choices but in a stronger format. The dead, buried and cremated document has miraculously arisen from the Liberal catacombs to once again dominate the industrial landscape.
The Fair Work (Registered Organisations) Amendment Bill 2014 and the ABCC have very similar powers to the Vicious Lawless Association Disestablishment (VLAD) laws introduced in Queensland by former Liberal National Premier Campbell Newman. But this one is clearly targeting workers — limiting our rights to be represented by our union or to be part of one.
There are ample laws in place that restrict union rights to talk with members on site and, in some cases, place penalties on workers to discourage them from standing together to keep workplaces safe.
Turnbull was supposed to release the findings from the Productivity Commission prior to the July 2 election and likewise he was supposed to release the Coalition's industrial relations policy, neither of which happened.
This could be interpreted as a broken promise before even going to the people. Is this going to be the norm for the remainder of the Turnbull government's term?
One Nation's election to the Senate is another major concern.
We must remember that Pauline Hanson was once a Liberal and was only dumped due to outside pressure which exposed the Liberal Party's racism.
Hanson has already stated she will support Turnbull in his endeavor to reintroduce the ABCC and other anti-worker legislation. In other words, she will still vote as a Liberal and her party will be made to follow suit.
She follows other disgruntled ex-Liberals and National Party members such as Clive Palmer, who was a shining example of how conservative leaders treat workers.
Many ordinary workers voted for Paul Hanson's One Nation this time around. The way the 457 visas are now being manipulated by the major companies and employer groups contributed to this.
Many workers, especially in the electorate of Flynn, which includes Gladstone, where I live, are very concerned about the increasing use of foreign workers by multinational companies under the 457 visa provisions in the traditional maintenance sector.
It was disappointing that neither major party addressed the content of the proposed industrial changes, leaving many in the dark. I believe that Labor's silence only helped the One Nation vote.
The Liberal Party was so concerned about some of the regional divisions in Flynn, it sent Attorney-General George Brandis — I presume at taxpayer's expense — to be a scrutineer at the vote count in Gladstone from July 5 to 8.
This is a prime example of where the government's priority lies: it is more interested in getting across the line than addressing serious local concerns.
As Turnbull's majority in both houses has now been significantly reduced, I believe he has lost any mandate to pursue his anti-worker legislation.
[Phil Golby is an organiser with the Australian Manufacturing Workers' Union in Gladstone and a member of the Socialist Alliance.]
From Green Left Weekly Friday July 15th 2016.
Like the article? Subscribe to Green Left now! You can also like us on Facebook and follow us on Twitter.
Posted by John/Togs Tognolini at Sunday, July 31, 2016