Tom Tanuki-Looking at the new gold standard in antilockdown influencer: Hoody the pilot preacher. (First in a series looking at the Convoy to Canberra.) 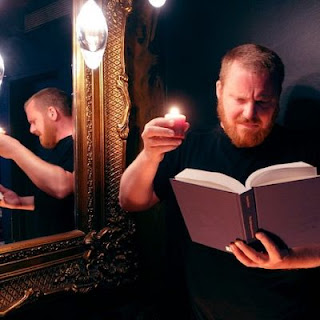 Tom Tanuki is a writer, satirist and anti-fascist activist. He has worked in political comedy online, on stage and at protests, through projects including direct action anti-racist group Yelling At Racist Dogs (Y.A.R.D.) and the satirical nationalist group Million Flag Patriots. His premiere theatre-comedy show, 'Yelling At Racist Dogs: Just As Bad', performed to sold-out crowds at the 2019 Melbourne Fringe Festival. 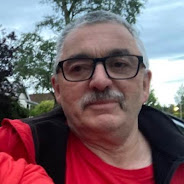 All my views expressed here are my own. I’m 63. Before I became a teacher in 2000. I worked in a variety of blue collar jobs as a labourer including working two years in General Motors Holden’s Melbourne car plants at Fisherman’s Bend and Dandenong, scaffolder, rigger, dogman, railway fettler, and ship's painter and docker. A life long unionist. I'm a proud and active member of the New South Wales Teachers Federation Union/Australian Education Union, & Greens member. I'm a historian, geographer, teacher, writer, actor, musician & poet. I’ve decided to reactivate my blog named after the house my Swiss/ Italian grandfather/nonno Antonio Tognolini and Uncle Henry Phillips built called Togs’s Place, they finished building it in 1906, in Yandoit, Central Victoria, Dja Dja Wurrung Country. It’s where my father Vic was born in 1910, the youngest of 12 children between Antonio and my grandmother Annie Batt/Phillips. Annie was a widow with 3 children when her and Antonio got together. I've produced four radio documentaries for ABC Radio National/RN: Bush Fires, Ups and Downs of Scaffolding, The Last Ship Built in the Dockyard, the HMAS Success built in Sydney’s Cockatoo Island Dockyard, the navy gave a me a sea ride on it from Hobart to Sydney. Underground about Lithgow Mine Rescue in New South Wales's Western Coal fields. I've made the films The Occupation of Cockatoo Island Dockyard 1989, The Deregistration of the Builders Labourers Federation-the Victorian Story 1986-1992. They were both disputes I was directly involved in and these films are on Youtube. I've also been involved in community radio since 1987 and worked as a journalist for the ABC Radio’s Double J and Triple J. I have a First Class Honours Degree in Communications from the University of Technology, Sydney and a Diploma of Secondary Education from the University of Western Sydney. I've also been a marker for the NSW Higher School Certificate’s Ancient History Examination. I completed the TAFE Certificate Two in Fire Fighting Operations and was a volunteer bush fire fighter for seventeen years and retired from this after I joined the Zipper Club when I had a mechanical heart valve inserted in 2011. I'm originally from Melbourne’s Brunswick, Wurundjeri Country and lived in Sydney Gadigal and Darug Lands and the Central Coast Darkinjung Country before moving to the Blue Mountain’s town of Katoomba Dharug and Gundungurra Lands in 1992 and was there for sixteen years before moving to Wellington Wuradjuri Country in Central West, New South Wales in 2008. The Mountain City Murders, my first book was published by Adelaide’s Ginninderra Press in 2010. My autobiographical account of heart disease Singing Johnny Cash in Cardiac Ward, A Personal Story of Heart Disease and Music was published in 2013. My first historical novel Brothers Part One: Gallipoli 1915 was published in 2014. I'm updating My 2015 book A History Man’s Past & Other People’s Stories: A Shared Memoir. Part One: Other People’s Wars is a shared history in many ways. It’s where part of my story reflects the people I’ve interviewed with my media work over thirty five years. My interview with retired Australian SAS Warrant Officer Dr Brian Day, who served with the US Special Forces in Vietnam and Cambodia. He was also a founding member of the Australian Vietnam Veterans Association. I interviewed him in 1992 on Anzac, Racism, and the Madness of the Vietnam War. My interview with Stan Goff, a retired US Army Special Forces Master Sergeant and Vietnam Veteran who served in the US Army up until Haiti in 1996. He became involved in Military Families Against War that was formed when George W.Bush invaded Iraq in 2003. My question to Veteran Journalist, Writer and Filmmaker John Pilger, at a public meeting in Katoomba, in the Blue Mountains about history being memory in 2008. My question to Activist, Academic, Writer and Linguist Noam Chomsky, and coverage of his Sydney Press Conference, when he visited Australia in 1995, campaigning for an independent East Timor, then under the murderous Indonesian Occupation. A shared history in another way too, I argue here that Australia’s Frontier Wars against our Indigenous Peoples should be recognised in the Australian War Memorial. I also argued against former prime minister Tony Abbott’s $90 million dollar John Monash Centre at Villers-Bretonneux, France and highlight the $400 million spent on the Centenary of Australia’s involvement in World War One as a major act of hypocrisy, when one in ten of our nation’s homeless are War Veterans. This book is also an attempt to answer that big question, why has Australia been at War so much in so many places normally as junior partner to Britain or the United States? I'm currently completing the Brothers historical novel series with the following three parts concentrating on the Western Front in France and Belgium from 1916 to 1918. In late April 2016, I moved back to Katoomba and I'm on the New South Wales Teachers Federation’s State Council for the Blue Mountains and secretary of the Blue Mountains Teachers Association. In 2018 I endured a stroke that nearly killed me. After recovering I decided to take a break from writing for 3 years. My photo is from 5.30am in Katoomba, 7th December 2021 before going to Sydney, where I was a marshal at the NSW Teachers Federation Rally of 15,000 striking teachers, later that morning outside the NSW State Parliament.

I will be posting a lot of my own work here but also articles, interviews and Youtube broadcasts from people that I like and respect. I was doing this when I first set up Togs's Place.Com back in 2006. I stopped using this blog when I went out Bush to Wellington in 2008. This is a massive blog/web site. To get around and find articles you want or just explore, use the SEARCH BLOG, if you enter Noam Chomsky, you'll not only come up with numerous articles, speeches, interviews by and with Chomsky, but also being referred to in articles by Robert Fisk, John Pilger, Naomi Kline and myself. With Blogger you've got to scroll down from the most recent till the oldest. Every posting has a label. These numbers go backwards to when I started this site in October 2006. For example, with me reactivating this site I have started COVID19 2022 for easy reference to posting on this topic. I will start a new folder when it becomes full, with new label COVID19 2022 B with the date that this folder starts. I will be putting up new topics such as health issues in relation to strokes and heart disease, learning languages such as French that I’ve been doing now for the last three years, acting, writing, Australian Football, reviews of films, plays and books, as well my acting projects of William Shakespeare’s monologues. This blog has been a learning experience for me and operating and with reactivating it. I will try to help satisfy the insatiable hunger for alternative news and opinion on a range of issues in Australia that is often ignored or sidelined by the corporate media and an increasing self censored and Murdoch managed ABC. In this time of COVID19, the Climate Change Emergency, Social and Racial Injustice, privatisation and attacks on Workers’ Rights, it is needed more than ever. I've added Google translation is here in Arabic, Bulgarian, Croation, Czech, Danish, Dutch, Finnish, French, German, Spanish, Hindi, Italian, Portuguese, Japanese, Norwegian, Korean, Chinese, Romanian, Russian, Swedish and Greek. Cheers John/Togs Tognolini 5-2-2022