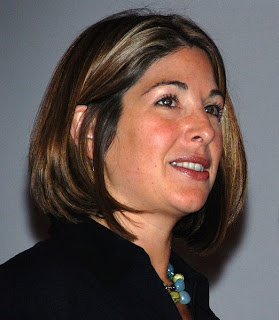 Naomi Klein
On March 18, continuing a long tradition of pioneering human rights campaigns, the Senate of the Associated Students of the University of California, Berkeley (ASUC) passed "A Bill In Support of UC DIVESTMENT FROM WAR CRIMES." The historic bill resolves to divest ASUC's assets from two American companies, General Electric and United Technologies, that are "materially and militarily supporting the Israeli government's occupation of the Palestinian territories"-and to advocate that the UC, with about $135 million invested in companies that profit from Israel's illegal actions in the Occupied Territories, follow suit.

Although the bill passed by a vote of 16-4 after a packed and intense debate, the President of the Senate vetoed the bill six days later. The Senate is expected to reconsider the bill soon; groups such as Jewish Voice for Peace are asking supporters of the bill to send letters to the Senators, who can overturn the veto with only 14 votes.

Here is the letter I just sent:

Dear members of the ASUC Senate,

I am writing to urge you to reaffirm Senate Bill 118A, despite the recent presidential veto.

It comes as no surprise that you are under intense pressure to reverse your historic and democratic decision to divest from two companies that profit from Israel's occupation of Palestinian territory. When a school with a deserved reputation for academic excellence and moral leadership takes such a bold position, it threatens to inspire others to take their own stands.

Indeed, Berkeley--the campus and the wider community--has provided this kind of leadership on many key issues in the past: not only Apartheid in South Africa but also sweatshops in Indonesia, dictatorship in Burma, political killings in Nigeria, and the list goes on. Time and again, when the call for international solidarity has come from people denied a political voice, Berkeley has been among the first to answer. And in virtually every case, what began as a small action in a progressive community quickly spread across the country and around the world.

Your recent divestment bill opposing Israeli war crimes stands to have this same kind of global impact, helping to build a grassroots, non-violent movement to end Israel's violations of international law. And this is precisely what your opponents--by spreading deliberate lies about your actions--are desperately trying to prevent. They are even going so far as to claim that, in the future, there should be no divestment campaigns that target a specific country, a move that would rob activists of one of the most effective tools in the non-violent arsenal. Please don't give into this pressure; too much is on the line.

As the world has just witnessed with the Netanyahu government's refusal to stop its illegal settlement expansion, political pressure is simply not enough to wrench Israel off its current disastrous path. And when our governments fail to apply sanctions for defiant illegality, other forms of pressure must come into play, including targeting those corporations that are profiting directly from human rights abuses.

Whenever we take a political action, we open ourselves up to accusations of hypocrisy and double standards, since the truth is that we can never do enough in the face of pervasive global injustice. Yet to argue that taking a clear stand against Israeli war crimes is somehow to "discriminate unfairly" against Israelis and Jews (as the veto seems to claim) is to grossly pervert the language of human rights. Far from "singling out Israel," with Senate Bill 118A, you are acting within Berkeley's commendable and inspiring tradition.

I understand that there is some debate about whether or not your divestment bill was adopted "in haste." Not having been there, I cannot comment on your process, though I am deeply impressed by the careful research that went into the decision. I also know that in 2005 an extraordinarily broad range of Palestinian civil society groups called on activists around the world to adopt precisely these kinds of peaceful pressure tactics. In the years since that call, we have all watched as Israeli abuses have escalated dramatically: the attack on Lebanon in the summer of 2006, a massive expansion of illegal settlements and walls, an ongoing siege on Gaza that violates all prohibitions on collective punishment, and, worst of all, the 2008/9 attack on Gaza that left approximately 1,400 dead.

I would humbly suggest that when it comes to acting to end Israeli war crimes, the international response has not suffered from too much haste but from far too little. This is a moment of great urgency, and the world is watching.

Naomi Klein is an award-winning journalist and syndicated columnist and the author of the international and New York Times bestseller The Shock Doctrine: The Rise of Disaster Capitalism, now out in paperback. Her earlier books include the international best-seller, No Logo: Taking Aim at the Brand Bullies (which has just been re-published in a special 10th Anniversary Edition); and the collection Fences and Windows: Dispatches from the Front Lines of the Globalization Debate (2002). To read all her latest writing visit www.naomiklein.org

Published on Wednesday, March 31, 2010 by CommonDreams.org
Posted by John/Togs Tognolini at Friday, April 02, 2010