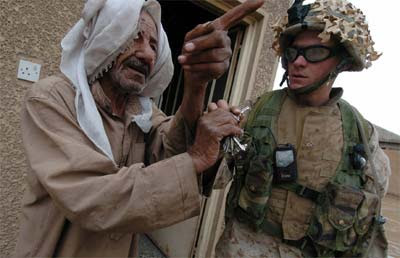 December 26, 2006
Inter Press Service
FALLUJAH, Dec 25 (IPS) - Ahmed Ghazi has little reason to stock Christmas toys at his shop in Fallujah. He knows what children want these days.
"It is best for us to import toys such as guns and tanks because they are most saleable in Iraq to little boys," Ghazi told IPS. "Children try to imitate what they see out of their windows."
And there are particular imports for girls, too, he said. "Girls prefer crying dolls to others that dance or play music and songs."
As children in the United States and around the world celebrate Christmas, and prepare to celebrate the New Year, children in Iraq occupy a quite different world, with toys to match.
Social researcher Nuha Khalil from the Iraqi Institute for Childhood Development in Baghdad told IPS that young girls are now expressing their repressed sadness often by playing the role of a mother who takes care of her small daughter.
"Looking around, they only see gatherings of mourning ladies who lost their beloved ones," said Khalil. "Our job of comforting these little girls and remedying the damage within them is next to impossible."
Hundreds of thousands of children have faced trauma of some sort. And for others, the lack of a normal life is trauma enough.
Just a lack of entertainment is developing into a serious problem. There are only 10 cinemas in Baghdad, and two dilapidated public parks. These are no longer safe for children.
Children do not go out much to play, and they are not sure of home any more. The United Nations estimates that more than 100,000 Iraqis are fleeing the country every month. The number of Iraqis living in other Arab countries is now more than 1.8 million. There are in addition more than 1.6 million internally displaced people within Iraq.
The group Refugees International says that the increasing number of people fleeing Iraq means that this refugee crisis might soon overtake that in Darfur. And children suffer most from leaving, and they suffer most where they go.
"Homeless children are inclined to be rough, and isolated from their new neighbourhood and new school colleagues," Hayam al-Ukaili, a primary school headmistress in Fallujah told IPS. "They do not mix in with their new atmosphere as they should. It is as if they feel it is imposed upon them, and they simply reject it."
Teachers and social workers say children have begun to nurse a strong hatred of the United States. No more is the United States the image of a good life.
"Children have lost hope in the United States and the Iraqi government after the situation has only worsened every day," Abdul Wahid Nathum, researcher for an Iraqi NGO which assists children told IPS in Baghdad (he did not want the organisation to be named).
"Their understanding of the ongoing events is incredible," he said. "It is probably because the elder members of the family keep talking politics and watching news. Talking to a 12-year-old child, one would be surprised by the huge amount of news inside his head, which is not right."
"Children are the most affected by the tragic events," Dr. Khalil al-Kubaissi, a psychotherapist in Fallujah told IPS. "Their fragile personalities cannot face the loss of a parent or the family house along with all the horror that surrounds them. The result is catastrophic, and Iraqi children are in serious danger of lapsing into loneliness or violence."
The difficulties of children have become particularly noticeable this year. "The only things they have on their minds are guns, bullets, death and a fear of the U.S. occupation," Maruan Abdullah, spokesman for the Association of Psychologists of Iraq told reporters at the launch of a study in February this year.
The report warned that "children in Iraq are seriously suffering psychologically with all the insecurity, especially with the fear of kidnapping and explosions."
The API surveyed more than 1,000 children throughout Iraq over a four-month period and found that "92 percent of the children examined were found to have learning impediments, largely attributable to the current climate of fear and insecurity."
With nearly half of Iraq's population under 18 years of age, the devastating impact of the violent and chaotic occupation is that much greater. Three wars since 1980, a refugee crisis of staggering proportions, loss of family members, suicide attacks, car bombs and the constant threat of home raids by occupation soldiers or death squads have meant that young Iraqis are shattered physically and mentally.
As early as April 2003, the United Nations Children's Fund had estimated that half a million Iraqi children had been traumatized by the U.S.-led invasion. The situation has degenerated drastically since then.
A report issued by Iraq's Ministry of Education earlier this year found that 64 children had been killed and 57 wounded in 417 attacks on schools within just a four-month period. In all 47 children were kidnapped on their way to or from school over the period.
Posted by John/Togs Tognolini at Wednesday, December 27, 2006