Workers mobilise for their rights by Sue Bolton 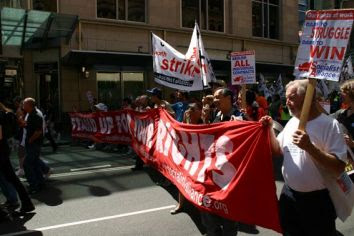 Despite generally being smaller in number compared to last year’s November anti-Work Choices protests, many of the November 30 city-wide rallies were as lively.

From Melbourne, Sue Bull reports that workers from across Victoria poured into the MCG, and later jammed the city all the way to Federation Square. Teachers, building workers, nurses, shop assistants, factory workers and security guards danced and chanted. The firefighters brought out an antique fire engine that reminded everyone just how far back PM John Howard’s reactionary laws will take workers if they take hold.

The Australian Council of Trade Unions (ACTU) estimated that 60,000 workers attended; some said that number swelled during the march. While the “G” was not full, from talking to activists from Portland, Mildura and Geelong, who had crammed onto buses and trains, no-one felt the day had been a failure. One building industry figure estimated that 95% of the industry had been shut down for the day.

Comedians Corrine Grant and Dave Hughes from recently axed ABC comedy program The Glasshouse warmed up the crowd. Grant said that as three train lines were down, several thousand workers would be late. She quipped that workplace minister Kevin Andrews had been seen leaving Frankston Station with a pair of bolt cutters. Comedian Gerry Connolly, dressed as the queen, said “she” had initially hired the PM on a collective agreement, but since he was no longer a team player she decided to sack him and re-hire him with a 30% pay cut. The comedy was interspersed with video footage of the Spotlight and Heinemann Electric workers’ campaigns against the IR laws.

Listening to Labor Premier Steve Bracks and the ALP’s Kim Beazley, one could be forgiven for thinking that it was a really big election rally. ACTU leaders Sharon Burrow and Greg Combet described how the laws have affected workers, with Combet outlining the extraordinary coercive powers of the building industry task force.

Asbestos sufferer and campaigner Bernie Banton reminded everyone just how inhuman these new laws could be if fully enacted. “Without the support of the unions, we would not be standing here today with victory at hand. The new laws will stop this.” Singer Jimmy Barnes belted out“Working Class Man” and said the band was proud to offer its services. No-one could have missed the drummer’s Union Solidarity T-shirt.

Russell Pickering reports from Perth that 4000 angry, chanting workers marched from the city centre to join several thousand more at the UnionsWA-organised protest at the Member’s Equity Stadium in East Perth. The earlier rally was organised by the Construction, Forestry, Mining and Energy Union (CFMEU), the Maritime Union of Australia (MUA), the National Tertiary Education Union (NTEU) and the Australian Manufacturing Workers Union (AMWU). Among the many passionate speeches, including from the Islamic community and a speaker from the Queer Bloc, MUA state secretary Chris Cain called on the fired-up crowd to bring PM John Howard down.

At the stadium, UnionsWA secretary Dave Robinson addressed the smaller than expected crowd, as did WA Labor Premier Alan Carpenter. Carpenter announced that a Fair Employment Advocate would now be informing the public about the disastrous impact of Work Choices. One of its first tasks may be to publicise possible fines for hundreds of construction workers after most were absent from the BHP Billiton project at Ravensthorpe. According to the December 1 West Australian, a spokesperson would not comment on whether BHP or its contractors would be calling on the Australian Building and Construction Commission to investigate the absences.

From Hobart, Susan Austin reports that about 2500 people, from a range of unions, marched first and finished with a rally to hear the Sky Channel hook-up.

Simon Cocker, secretary of Unions Tasmania, reported on the huge number of people wanting to take action on unfair dismissal cases, but who could not because of the new laws. He critised the Howard government for withdrawing funding from community organisations, saying that in 2007 the Working Women’s Centre and the Launceston Community Legal Centre would be unable to represent or advise aggrieved workers.

Cocker condemned the laws for allowing employers to cut pay and persecute unions. “There may not be bruises, but these laws are state-sanctioned violence against working people”, he said.

Despite the ALP-dominated platform, a huge cheer went up for Greens leader Bob Brown when he appeared on Sky Channel.

John McGill from Adelaide reports that the turnout of 15,000 (UnionsSA estimated 30,000) was larger than for the June 28 protest of around 8000, largely because the AMWU put in big effort to mobilise their members. This time, the car plants closed down — in June, the AMWU made an agreement with management to allow delegates to attend while production was kept going.

Melbourne comedian Rod Quantock, who chaired the rally, humorously contrasted the successful French protests against the attempt to introduce anti-union laws there, with the movement here. He said that while there were massive marches against the former Victorian Liberal premier Jeff Kennett there were many who, while being vehemently opposed the government, didn’t protest because they “had to mow the lawn”. Quantock quipped that it was likely that there were not many lawns in France, and that was why people took to the streets all the time!

From Sydney, Susan Price reports that workers started arriving from 7.30am at Belmore Park, with some unions putting on a breakfast for their members. A large NTEU contingent marched down from Sydney University, linking up with TAFE unionists. By the time of the video hook-up, more than 20,000 people had gathered in Belmore Park and up to 10,000 at Tumbalong Park at Darling Harbour, the rallying point for members of the Transport Workers Union; the Media, Entertainment and Arts Alliance; the Finance Sector Union (FSU); the NSW Teachers Federation; and others.

The two rallies converged at Goulburn Street, and marched along George Street to meet at Bridge Street not far from the Stock Exchange. The combined crowd, which swelled during the march, was estimated by Unions NSW as up to 40,000.

Speakers included NSW ALP premier Morris Iemma and Carmel Burke, an employee of Westpac Bank and member of the FSU, who outlined her union’s recent victory against Westpac’s intention to take jobs off shore.

Across NSW, there were some 200 localities where rallies and hook-ups to the MCG were held. Around 500 people gathered at Bankstown, up to 1000 at Parramatta, and 300 rallied at each of the two Penrith venues.

Nick Fredman reports from Lismore that around 1200 people took part in the national day of action. The Workers Club was packed with 1100 union members for the broadcast, about a third of whom also rallied outdoors. Some passers-by then joined a march that involved up to 600 people.

Speakers included Jodi Wilff, whose recent unfair sacking from the local Harvey Norman outlet has been highlighted by the Northern Rivers Unionist Network, the organisers of the march and rally. Peter Lanyon, ALP candidate for Lismore in the March NSW elections, argued that a conservative state government would be disastrous for workers.

Greens candidate Andy Gough responded that state Labor governments have not done nearly enough to protect workers, citing the Bracks Victorian government’s refusal to reinstate a state industrial system. Bernie Wunsch, from the Socialist Alliance, denounced the “corporate greed” of employers, such as the Commonwealth Bank, and he was cheered when he called for “a society in which bosses and not workers have to come crawling on their knees for a few rights”.

Steve O’Brien reports from Newcastle that more than 5000 people enthusiastically greeted Mal Peters, one of the 107
construction workers fined in Western Australia, at the Newcastle rally in the Energy Australia Stadium. Referring to the WA 107 workers, he said, “If you don’t fight, they lose”. CFMEU leader Dave Noonan accepted a $40,000 cheque from the local branch of the union. A motion to continue the fight was endorsed by acclamation.

Andrew Martin reports from Brisbane that 12,000 workers rallied at the Southbank Cultural Forecourt. After hearing from footballer Tommy Roudonikas who urged people “to keep fighting”, more than 1000 ETU members, led by a marching band and a large contingent of apprentices, marched from Musgrave Park. The Liquor, Hospitality and Miscellaneous Union (LHMU) also had a pre-rally meeting at Musgrave Park with more than 500 members.

No other manufacturing or construction unions marched to the rally, but rows of blue Builders Labourers Federation T-shirts and corflutes were prominent.

Premier Peter Beattie addressed the Southbank rally pledging to establish a telephone hotline for workers to report unfair treatment complaints over Christmas. He said that Labor was fighting “for the Australian way of life”. Queensland Council of Unions general secretary Grace Grace repeated the theme that workers’ rights were “worth fighting and voting for”.

Up to 40000 people gathered at 42 venues across Queensland, with 1300 gathering at the Ipswich Bundamba Turf club. The local newspaper, the QT Times, reported that only one person applauded when Kim Beazley took to the platform at the MCG.

Karl Miller from Canberra reports that around 2000 people gathered on Manuka Oval. Numbers were down from 5000 at last November’s rally, but a big increase from June 28 when there was no central rally. After Sky Channel presentation, the protestors marched to Parliament House where a line-up of ALP MPs was followed by an address from Kim Sattler of UnionsACT.

Will Williams reports from Wollongong that the Illawarra Mercury said more than 7000 people filled the WIN Stadium, about the same size as the June 28 anti-Work Choices protest. It was smaller than the hoped for 10,000-strong protest probably because the majority of BlueScope workers did not stop work due to intimidation. The steelworkers are mainly covered by the Australian Workers Union.

The biggest contingents were the MUA; the United Firefighters Union; the ASU; the LHMU; and the NSW Teachers Federation. The loudest and most vibrant contingent was the Socialist Alliance.