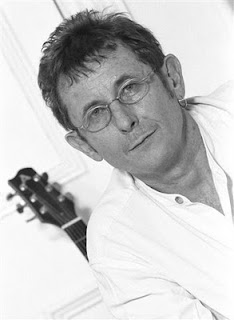 It was with a great deal of sadness and stunned disbelief that I heard of Alistair Hulett’s death from cancer in his beloved Glasgow. It was too soon for such a man to die, with so much ahead of him. I used to share house with him in Sydney’s Inner suburb of Glebe in 1988-89, and remember meeting him in 1987 at the Sando, Newtown’s famous Sandrigham Hotel in King St.

That first time I met him in the Sando, he and the rest of Roaring Jack were playing Lads of the BLF. I didn’t know Roaring Jack was a political band and just went into the pub for a drink. I was an organiser in the Builders Labourers Federation, the union deregistered/outlawed by Bob Hawke’s ALP federal government, the first Thatcherite Labor Party government in the world. This is where the hated Australian Building Construction Commission was born and thought up by John Howard Conservative's government and kept and refined by Kevin Rudd’s ALP government.

I lost track of how many gigs I asked Alistair and the lads in Roaring Jack to play at, and they always played: whether it was for the Aboriginal Deaths in Custody campaign that ended up in the Royal Commission, the BLF Christmas picnic or during the three month strike/occupation at Cockatoo Island Dockyard occupation in 1989 or benefits for community radio’s Radio Skid Row.

And of course Alistair and Roaring Jack were playing outside Sydney’s Long Bay Goal in 42 degree heat for Tim Anderson, when he was framed for the Hilton Bombing and performing Alistair’s song Framed on Australia’s MTV show. We won that fight and the Royal Commission into Police Corruption came out of Tim’s three convictions of murder being overturned and quashed.

I had Alistair play live to air many times when I did my radio show Radio Solidarity in Radio Skid Row's studios. If there was a cause to fight Alistair would be there with a song he wrote for it. Also Alistair and Roaring Jack performed on the first Green Left Weekly Sydney Harbour cruise where we had to stop the boat for more beer.

The last time I saw Alistair was two years ago at Katoomba’s Blue Mountains Folk and Blues Festival.

To all of us that knew him, his Comrades in Socialist Alternative and all of us on the Left whether here in Australia or in Britain and his beloved Scotland, the words about Joe Hill are fitting,