Where next in the battle against the establishment? The Christmas number one shows that the people are not powerless by Mark Steel 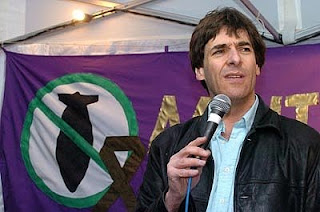 I think it's going to take a surgeon to remove this grin I've had, since it was revealed who was Christmas number one. And the brilliant thing is a song can't let you down by betraying its ideals. So there's no worry that by Thursday the chorus will have changed from "Fuck you, I won't do what you tell me", to "All right, just this once, but I warn you I'm losing my patience".

Now all those places where, every year, they force us to listen to "Step Into Christmas" and "Simply Having a Wonderful Christmas Time", on the assumption this drivel is popular, should be forced to play Rage Against The Machine, which has proved its Christmas likeability. It would be so much more festive in Asda to hear "You justify those who died – bing bong, don't forget our chestnut paté is great value at three for the price of two, that's a whole tin of super Christmas paté FREE – I WON'T DO YOU WHAT YOU TELL ME."

Surely it ought to be law that it must be played at railway stations, in hospital waiting rooms, at children's parties and every 20 minutes on Magic FM. But an awkward minority seems to disagree. X Factor fans have been articulating their anger on their website, with comments such as, and I promise these are genuine, "If Rage are any good how come they didn't even get past the audition stage of X Factor?" Or there's "If they're an old band, how come I've never heard of them, when I know most music from Westlife to Lady Gaga?"

Whereas the Rage site, which now has one million members, is full of discussions about opposing wars while supporting the soldiers, debates about the music industry, and causes the band has supported such as rights for Mexican farmers who were driven off their land. So I suppose the victory will be complete when the comments on the X Factor site are along the lines of "OMG! Joes so fit but nxt song shd b 4 people of Gaza, as duet wid Cheryl, to gr8 struggle in PalSdine!"

Politicians are sure to have noticed. Now that Gordon Brown has seen that shrieking rage seems to be popular, he'll start his first TV debate by saying "This issue of how to regulate a global economy can only be addressed if we TAKE THE POWER BACK, UGH UGH, because David, with respect if we SETTLE FOR NOTHING NOW, WE'LL SETTLE FOR NOTHING LATER, EEEYEEEUGHHYAAGH!! And that, I must say, also applies to Liberal Democrats."

But this episode has been about so much more than the music charts. Because it's shown that an apparently invincible machine with limitless resources can be defeated with no funds, a computer and some imagination. And having decided to thwart the unstoppable Simon Cowell, the couple who launched the campaign then thought, "That's too easy. To make it more of a challenge we'll choose a song that's screechingly militant and full of swearing."

So their success challenges the central obstacle seeping through the country, which is cynicism. For example, the rage against politicians for their publicly funded moats and duck islands hasn't led to much of a rise for parties who weren't implicated in this swindling, it's just added to a sense of "Nothing makes any difference, they're all at it". At the moment Mahatma Gandhi could announce he was standing for elections, and millions of people would go "Baah. I bet he's been claiming for a second loincloth in Calcutta".

There's growing resentment about the war in Afghanistan, but hardly any campaigning which reflects that. There's fury about the bankers, but a sense of resignation that there's nothing we can do. Part of the problem may come from assuming the answer lies in THEM doing something. So political debate centres around which soulless politician might be a bit less awful than the others.

The question for anyone who wants to take on the establishment is not what should they do, but what should WE do? No matter how trivial the issue may appear to be, the Christmas number one campaign has sent an opposite message, that we CAN do something. So already there's a discussion amongst supporters of the campaign to initiate "Rage Against the Banks", with ideas for how to force them to change their greedy ways.

And whatever else, at last we have a genuinely Christmassy number one, that reflects how King Herod tried to keep his population under control, but thankfully Joseph and Mary had the courage to run off, while no doubt saying to the Romans a festive "Fuck you, I won't do what you tell me".

First published in The Independent on 23rd December 2009
Posted by John/Togs Tognolini at Thursday, January 07, 2010