The Looming Nuclear Nightmare in the Backwoods of North Carolina By JEFFREY ST. CLAIR 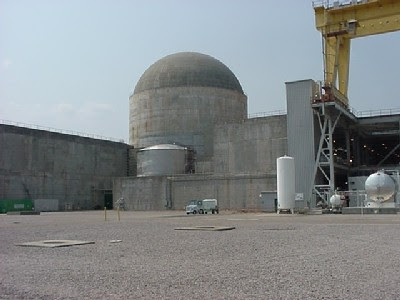 This is an excerpt from Jeffrey St. Clair's new environmental history, Born Under a Bad Sky, now available from AK Press / CounterPunch Books.

Looking for weapons of mass destruction? Try the backwoods of North Carolina. The site is easy to find. You don’t need infrared telemetry, informants, or a global positioning satellite. Just follow the railroad tracks deep into the heart of the triangle area to the gleaming cooling tower of the Shearon Harris nuclear plant, which rises like a concrete beacon out of the forest.

It may not look like much—a run-of-the-mill nuke—but inside the confines of the steel fence that rings the plant, resides one of the most lethal patches of ground in North America. Shearon Harris is not just a nuclear power-generating station, but a repository for highly radioactive spent fuel rods from two other nuclear plants owned by Progress Energy.

Those railroad tracks? They’re for hauling nuclear waste. The spent fuel rods are carted by rail from the Brunswick and Robinson nuclear reactors to Shearon Harris, where they are stored in four densely packed pools, filled with circulating cold water to keep the waste from heating up. The pools are interconnected and enclosed within one building. That building is attached to the reactor itself. Together, they form the largest radioactive waste storage pools in the country.
All this makes Shearon Harris a very inviting target for would-be terrorists. In fact, the Department of Homeland Security has fingered Shearon Harris as one of the most vulnerable terrorist targets in the nation.

Potential atomic terrorists don’t have to steal plutonium, take a crash course in physics, or concoct a bomb to manufacture a radiological nightmare scenario in the heart of the Carolinas. All they have to do is penetrate the security fence of a lightly guarded commercial reactor and find a way to ignite the pools of high-level radioactive waste. The easiest method is to disrupt the circulation of the water system that keeps the pools cool.

The resulting fire would be virtually unquenchable. Moreover, because the water system that feeds the waste pools is also connected to the Shearon Harris reactor, a pool fire could also trigger a nuclear meltdown. And so it goes.

An uncontrolled pool fire and meltdown at Shearon Harris would put more than two million residents of this rapidly growing section of North Carolina in extreme peril. A recent study by the Brookhaven Labs, not known to overstate nuclear risks, estimates that a pool fire could cause 140,000 cancers, contaminate thousands of square miles of land, and cause over $500 billion in off-site property damage.

An October 2000 report from the Sandia Labs in Albuquerque painted a grim picture of the consequences from a pool fire. The report, which was kept under wraps for two years by the NRC, found that a waste pool fire could spread radioactive debris over a 500-mile radius, including Cesium-137, a carcinogen linked to birth defects and genetic damage.

When details from this report leaked out to the press, Mike Easley, the governor of North Carolina, responded by ordering that iodine pills be distributed to neighbors of the plant. It was a touching gesture. But iodine is no defense against the ravages of Cesium-137.

Despite vows of beefed up security by the nuclear industry, it’s not that difficult to break into most commercial nuclear plants and security at Shearon Harris is notoriously lax. In 1999, NRC records show that two Progress energy employees gained access to the reactor and the waste pools without security clearance. The energy company has hired numerous employees with questionable security backgrounds, including three guards who failed psychological exams and one with a criminal record.

The whole plant could go up without the intervention of terrorists. Basic mismanagement and design flaws in the plant could well do the trick. In fact, the NRC has estimated that there’s a 1:100 chance of a pool fire happening under the rosiest scenario. And the dossier on the Shearon Harris plant is far from rosy.

In 1999, the nuclear plant experienced four emergency shutdowns, or SCRAMS. The problems led plant managers to tell the Charlotte News and Observer that they were “very disappointed,” engaged in “soul searching,” and unsure whether the string of malfunctions were “coincidental or a sign of deeper problems.”

A few months later, in April 2000, the plant’s safety monitoring system, designed to provide early warning of a serious emergency, failed. It wasn’t the first time. Indeed, the emergency warning system at Shearon Harris has failed fifteen times since the plant opened in 1987.
Between January and July of 2002, Harris plant managers were forced to manually shut down the reactors four times. Then in August of that year, the plant automatically shut itself down when the outside power grid weakened.

Documents uncovered from the Nuclear Regulatory Commission reveal other problems at Shearon Harris. Inspectors have found “rubber and other foreign material” clogging the cooling lines in the plant’s heat removal system. There are also internal memos from the plant reporting that many of its evacuation sirens within the ten-mile emergency zone surrounding the plant are inoperable during severe weather.

In 2002 the NRC put the plant on notice about nine unresolved safety issues detected during a fire prevention inspection by NRC investigators. The plant was hit with a “Security Level III Notice of Violation.” When the NRC returned to the plant a few months later for a reinspection, it determined that the corrective actions were “not acceptable.”

The problems continue with a chilling regularity. In the spring of 2003 there were four emergency shut downs of the plant, including three SCRAMs over a four-day period in the middle of May. One of the incidents occurred when the reactor core failed to cool down during a refueling operation while the reactor dome was off of the plant—a potentially catastrophic series of events.

Between 1999 and 2003, there were twelve major problems requiring the shutdown of the plant. According to the NRC, the national average for commercial reactors is one shutdown per eighteen months.

The situation at Shearon Harris is made more dire by virtue of the fact that the reactor is directly tied into the cooling system for the spent fuel pools. A breakdown (or sabotage) in either system could lead to serious consequences in the other.

Congressman David Price, the North Carolina Democrat, sent the Nuclear Regulatory Commission a study of the situation by scientists at MIT and Princeton. The report pinpointed the waste pools as the biggest risk at the plant. “Spent fuel recently discharged from a reactor could heat up relatively rapidly and catch fire,” wrote Bob Alvarez, a former advisor to the Department of Energy and co-author of the report. “The fire could well spread to older fuel. The long-term land contamination consequences of such an event could be significantly worse than Chernobyl.”

The study recommended that the spent fuel pools be replaced with low-density, open frame racks and that the older waste assemblages be placed in hardened, above-ground storage units. The change could be done relatively cheaply, costing the energy giant about $5 million a year—less than the $6.6 million annual bonus for Progress CEO Warren Cavanaugh.

But Progress scoffed at the idea and recruited the help of NRC Commissioner Edward McGaffigan to smear the MIT/Princeton report. In an internal memo, McGaffigan instructed NRC staffers to produce “a hard-hitting critique that sort of undermines the study deeply.”
McGaffigan is a veteran cold-warrior and a nuclear zealot, who has worked for both Democrats and Republicans. A veteran of the National Security Council in the Reagan administration, McGaffigan took a special interest in promoting nuclear plants to US client states. He left the White House to serve as the chief policy aide on energy and defense issues for Senator Jeff Bingaman, the Democrat from New Mexico. In 1996, President Clinton appointed him to the Nuclear Regulatory Commission, where he became a tireless proponent of nuclear power on the ludicrous grounds that it will slow the onslaught of global warming. McGaffigan has also consistently dismissed the risks associated with the transport and storage of nuclear waste. Just prior to leaving office, Clinton reappointed him to another full term in 2000.

McGaffigan’s meddling outraged many anti-nuke activists. “There’s a huge credibility in the federal regulatory agencies,” said Lewis Pitts, an environmental attorney in North Carolina. “After 9/11, the nuclear industry faked a report to convince the public that an airplane hitting a nuke plant is nothing to worry about and now the NRC has directed the production of a bogus study to deny decades of science on the perils of pool fires.”

If the worst happens, the blame will reside in Washington, which has permitted the Shearon Harris facility to become a nuclear time bomb. The atomic clock is ticking.

Jeffrey St. Clair is the author of Been Brown So Long It Looked Like Green to Me: the Politics of Nature and Grand Theft Pentagon. His newest book, Born Under a Bad Sky, is just out from AK Press / CounterPunch
Posted by John/Togs Tognolini at Saturday, August 16, 2008