Musharraf Will be Gone In Days by Tariq Ali 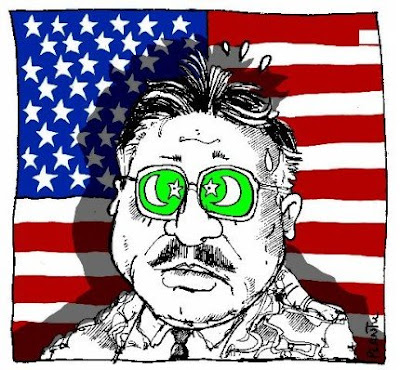 There is never a dull moment in Pakistan. As the country moved from a moth-eaten dictatorship to a moth-eaten democracy the celebrations were muted. Many citizens wondered whether the change represented a forward movement.
Five months later, the moral climate has deteriorated still further. All the ideals embraced by the hopeful youth and the poor of the country – political morality, legality, civic virtue, food subsidies, freedom and equality of opportunity – once again lie at their feet, broken and scattered. The widower Bhutto and his men are extremely unpopular. The worm-eaten tongues of chameleon politicians and resurrected civil servants are on daily display. Removing Musharraf, who is even more unpopular, might win the politicians badly-needed popular support, but not for long.

As the country celebrated its 61st birthday today, its official president, ex-General Pervez Musharraf, was not allowed to take the salute at the official parade marking the event, while state television discussed plans to impeach him. Within a few days at most, Musharraf will resign and leave the country. Pakistan's venal politicians decided to move against him after the army chief, Ashfaq Kayani, let it be known that there would be no military action to defend his former boss.
Washington followed suit. In Kayani they have a professional and loyal military leader, who they imagine will do their bidding. Earlier John Negroponte had wanted to retain Musharraf as long as Bush was in office, but they decided to let him go. Anne Patterson, the US ambassador, and a few British diplomats working under her, tried to negotiate a deal on behalf of Musharraf, but the politicians were no longer prepared to play ball. They insisted that he must leave the country. Sanctuaries in Manhattan, Texas and the Turkish island of Büyükada are being actively considered. The general would prefer a large estate in Pakistan, preferably near a golf course, but security considerations alone would make that unfeasible. There were three attempts on his life when he was in power and protecting him after he goes would require an expensive security presence. Had Musharraf departed peacefully when his constitutional term expired in November 2007 he would have won some respect. Instead he imposed a state of emergency and sacked the chief justice of the supreme court who was hearing a petition challenging Musharraf's position.
Now he is going in disgrace, abandoned by most of his cronies who accumulated land and money during his term and are now moving towards the new powerbrokers. Amidst the hullabaloo there was one hugely diverting moment involving pots and kettles. Two days ago, Asif Zardari, the caretaker-leader of the People's party who runs the government and is the second richest man in the country (from funds he accrued when his late wife was prime minister) accused Musharraf of corruption and siphoning US funds to private bank accounts.
Musharraf's departure will highlight the problems that confront the country, which is in the grip of a food and power crisis that is creating severe problems in every city. Inflation is out of control. The price of gas (used for cooking in many homes) has risen by 30%. Wheat, the staple diet of most people, has seen a 20% price hike since November 2007 and while the UN's Food and Agriculture Organisation admits that the world's food stocks are at record lows there is an additional problem in Pakistan.
Too much wheat is being smuggled into Afghanistan to serve the needs of the Nato armies. The poor are the worst hit, but middle-class families are also affected and according to a June 2008 survey, 86% of Pakistanis find it increasingly difficult to afford flour on a daily basis, for which they blame their own new government.
Other problems persist. The politicians remain divided on the restoration of the judges sacked by Musharraf. The chief justice, Iftikhar Muhammad Chaudhry, is the most respected person in the country. Zardari is reluctant to see him back at the head of the supreme court. A possible compromise might be to offer him the presidency. It would certainly unite the country for a short time. And there is the army. Last month, the country's powerless prime minister, Yousuf Gilani, went on a state visit to the US. On July 29 he was questioned by Richard Haass, president of Council on Foreign Relations:
Haass: Let me ask the question a different way, then – (laughter) – beyond President Musharraf, which is whether you think now in the army there is a broader acceptance of a more limited role for the army. Do you think now the coming generation of army officers accepts the notion that their proper role is in the barracks rather than in politics?
Gilani: Certainly, yes. Because of the February 18 election of this year, we have a mandate to the moderate forces, to the democratic forces in Pakistan. And the moderate forces and the democratic forces, they have formed the government. And therefore the people have voted against dictatorship and for democracy, and therefore, in future even the present of – the chief of the army staff is highly professional and is fully supporting the democracy.
This is pure gibberish and convinces nobody. Over the last 50 years the US has worked mainly with the Pakistan army. This has been its preferred instrument. Nothing has changed. The question being asked now is how long it will be before the military is back at the helm.
Tariq Ali's latest book, The Duel: Pakistan on the Flight Path of American Power will be published in September by Simon and Schuster
Posted by John/Togs Tognolini at Saturday, August 16, 2008