Unions standing up for themselves By Tim Gooden (Secretary, Geelong Trades Hall Council) 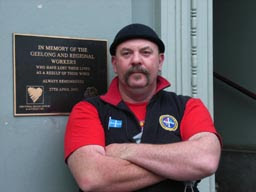 Tim Gooden
The following comment piece by m y Socialist Alliance Comrade Tim Gooden on an August 5 editorial in the Geelong Advertiser will appeared in the Monday 11 August edition of that paper.

When does a worker, even a casual or part-time worker, join a union? When it’s clear that membership brings better pay, working conditions and job security.
Why, then, is union membership among workers at an all time low? Because in so many industries union membership doesn’t seem to bring these benefits.
Perhaps it’s because some employers– very few - can pay high wages or maybe workers have been intimidated into not joining a union.
But it’s also because unions simply aren’t always there when workers need them. The major problem is one of union organisation. The 2006 ACTU congress was told that surveys showed that 1.5 million workers would join a union if they were asked.
However where unions are campaigning as with the nurses, teachers and construction workers they are growing.
Which brings us to Work Choices. In its August 5 editorial (“Unions battle for new recruits”) the Advertiser notes that “the union movement is thoroughly unhappy with Kevin Rudd and his sluggishness tearing apart the previous Liberal government’s workplace laws¨, but it doesn’t say why.
It’s because Howard’s laws criminalise basic union organising - the right of entry and the right to take industrial action. These laws have had a much greater impact on union relevance in the eyes of workers than things like the end of payroll deduction of union dues.
Work Choices and other laws threaten unions with massive penalties if they act illegally. And this has been going on for over 25 years in this country. Who can forget Peter Costello’s role with the HR Nicholls Society in the Dollar Sweets and Mudginberri disputes or the role of Rio Tinto constantly sueing miners in the Weipa and Geraldton disputes?
If unions are really to defend workers’ rights and conditions they often risk breaking the law. Whether it’s fighting an unfair dismissal or closing down a dangerous worksite, going by the legal road can mean losing the dispute.
It’s a stark choice: be law-abiding and irrelevant, or do the right thing to defend workers wages and conditions and risk crippling penalties (remember Brumby’s threats against Victoria’s nurses). The space for legal union action is tiny.
This explains why the employers are determined to hold onto Work Choices. It’s why they relentlessly blackmail the Rudd government with talk about the union threat to investment.
It drives the building bosses’ support of the Australian Building and Construction Commission (ABCC), which treats one million building workers as if they are terrorist suspects.
Disappointingly, even though the Rudd government is packed with former union officials it has been far more responsive to employer pressure than to the appeals of the ACTU. By contrast, in New Zealand, a Labor government restored the union right of entry that had been removed by a previous conservative administration. As a result NZ’s Unite union could make big strides in organising young, mainly casual, workers.
In the Australia of 2008 the ability of the union movement to prove its relevance depends on whether it can force the full repeal of Work Choices and related laws (or neutralise them in practice).
That’s why 1500 union delegates met in Melbourne on July 30 to campaign against the charging of Noel Washington, the construction unionist facing a six-month jail term for exercising his right to remain silent and to get rid of all anti union laws.
In effect, the delegates were following the advice of the Advertiser editorial: “It’s time the unions stood up for themselves.”
Finally what’s wrong with 14 year old workers joining unions? If they’re old enough to be ripped off by unscrupulous bosses - and believe me I deal with cases every week - then they’re old enough to band together and collectively defend their rights. That’s real unionism.
Posted by John/Togs Tognolini at Saturday, August 16, 2008

Labels: Howard is Gone But What About His WorkChoices?