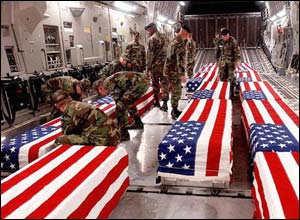 WASHINGTON - The war in Iraq is the issue in the critical Nov.7 election -- and it should be.
Voters surely will want to have a say on the national policy that has taken a huge human toll of casualties, both American and Iraqi, and is draining the U.S. Treasury.
Although they are not on the ballot, President Bush and Vice President Dick Cheney are running scared, with Bush warning that the Democratic approach means that "the terrorists win and America loses."
It's a rare opportunity to weigh in on the nation's foreign policy and to send a message to the president who led the country into an unnecessary war.
This is also a chance for the voters to assess the political fate of the do-nothing rubber-stamp Congress, where lawmakers failed to question the president's motives in creating the Iraqi disaster.
The majority of Democrats on Capitol Hill went along with the October 2002 resolution that the administration took as the go-ahead for the invasion and occupation of the oil-rich country.
Democrats can't complain, but they can see the light and change their minds. They might even be able to propose an exit date and escape being accused by GOP opponents of not supporting the troops -- despite Bush's desperate rhetoric -- since some Republicans are looking for a way out of the quagmire, too.
Other Republican candidates seem to be shying away from the war issue as they put some distance between themselves and Bush. Many aren't eager for the traditional side-by-side public appearances with the president.
Senate Majority Leader Bill Frist, R-Tenn., said last week that Republican candidates should steer clear of the war in Iraq and get Americans focusing on pocketbook issues.
Not all are taking that advice.
Rep. David Dreier, R-Calif., said in a recent column in the Christian Science Monitor that although "the struggle (meaning the war) is incredibly difficult, the Republican approach is working for America."
Karl Rove, White House political adviser, has been urging party candidates to stick with the tried-and-true emphasis on national security and the war on terrorism, promising it would play well at the polls.
The president also has thrown in a last-minute diatribe against gay marriage.
To take over Capitol Hill and turn Bush into a real lame duck, Democrats need to win 15 seats in the House and six in the Senate.
In a midterm correction to help beleaguered Republican candidates, Bush has now rejected the slogan "stay the course" that he and his top advisers had used to flay the Democrats, whom they accused of wanting to "cut and run."
The administration also has been talking loudly about benchmarks and timetables to assure voters that there is some movement toward an Iraq exit strategy.
Iraqi Prime Minister Nouri al-Maliki denies there is any deal on timing of withdrawal of American troops and dismissed such talk as a campaign ploy for U.S. domestic consumption.
Bush told ABC-TV's George Stephanopoulos on "This Week" on Oct. 22: "We've never been 'stay the course,' " a claim that smoothly ignored repeated statements by the president and other administration officials over the past three years.
The election is not only a referendum on the war but also on the administration's waning credibility.
Commonly referred to as "The First Lady of the Press," former White House Bureau Chief Helen Thomas is a trailblazer, breaking through barriers for women reporters while covering every President since John F. Kennedy. For 57 years, Helen also served as White House correspondent for United Press International. She recently left this post and joined Hearst Newspapers as a syndicated columnist.

Published on Friday, November 3, 2006 by the Seattle Post-Intelligencer (Washington)
Posted by John/Togs Tognolini at Saturday, November 04, 2006