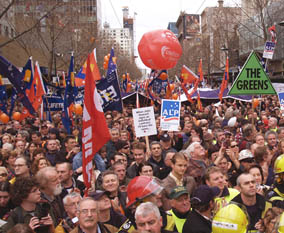 In a majority decision of five to two, the High Court dismissed the legal challenge brought by state governments, Unions NSW and the Australian Workers Union (AWU) against Work Choices on November 14.

The challenge, a cornerstone of Labor state governments’ opposition to PM John Howard’s new IR laws, argued that the federal government had used a too-liberal definition of powers granted to it under the federal constitution which allows it to regulate corporations. The court rejected the states’ argument, upholding the entire Work Choices laws.

The ruling paves the way for the federal government to override state industrial relations systems. This means that workers covered by state awards may now be subject to Work Choices’ provisions.

Some union leaders have interpreted the High Court ruling as signifying that the only remaining way to defeat Work Choices is through the ballot box.

“The only option for working people is to come together and throw this government out so we can get rid of these laws”, John Robertson, secretary of Unions NSW told the Australian on November 14. Labor IR spokesperson Stephen Smith and AWU national secretary Bill Ludwig backed Robertson’s comments.

Tim Gooden, secretary of the Geelong and Regional Trades Hall Council, took a different view. “The High Court challenge to these laws was always a long shot”, he told Green Left Weekly. “The only time we’ve had wins from the courts is when we’ve already won the fight on the ground, like in 1998 with the battle against Patrick [Stevedores]. This decision just shows that the union movement has a lot of work to do to defeat these laws.”

“We should be looking to vote Howard out at the next election, but that’s no certainty”, Gooden continued. “The ACTU needs an industrial strategy as well as a political one. Everything we’ve ever won has been the end result of an industrial struggle where the bosses have been forced to make concessions.

“Even during the Menzies Liberal government, unions and progressive movements made some gains for workers’ rights, despite the difficulties, because they waged industrial and political struggles. They certainly campaigned against Menzies at the ballot box, but that isn’t all they did.

“Right now, we need an industrial campaign to put pressure on the bosses who are backing Howard. This is what the trade union movement does best.

“We also need to be prepared to keep up the pressure if a Labor government is elected. We’ve seen Labor in government; unless we keep up the pressure, Labor will chicken out of following through on the promise to scrap these laws, especially when companies like Rio Tinto put the screws on.”

Federal workplace relations minister Kevin Andrews announced a range of amendments to Work Choices on November 13. The changes largely come at the behest of Australia’s largest employer group, the Australian Chamber of Commerce and Industry, which has lobbied the Howard government to fix the legislation since its introduction in March. Andrews presented the amendments to Work Choices as necessary changes to streamline the legislation. They give the bosses greater power to strip workers’ conditions, and reduce bosses’ accountability.

Among the amendments, workers will be given the “right” to cash-out their sickness/carer’s leave entitlements (provided they maintain a minimum of 15 days). As with the provision giving workers the “right” to cash-out two weeks of their annual leave, the only safeguard against abuse is that an employee must sign a written request — hardly a guarantee of fair play.

A second amendment is supposedly intended to preserve workers’ redundancy payments for up to 12 months after the end of a workplace agreement, or the sale of a company. The provision only applies however, if workers are not convinced to sign a new agreement in the 12 month period, meaning that workers may be faced with the threat of signing away their redundancy entitlements, or losing their job.

This is the Hobson’s choice facing workers in Melbourne’s west, who are being told by their new employer Godfrey Hirst, who bought the insolvent Feltex company, to either sign individual contracts (AWAs), which substantially reduce their redundancy entitlements, or lose their jobs. The government’s amendments to its industrial relations legislation offer them no recourse at all.

The third amendment gives bosses the right to stand down workers without pay, “where work is unavailable due to factors outside the employer’s control”. This provision extends to bosses the right to stand their workers down for practically any reason, be it a Christmas slow-down, a strike at another company, or even inclement weather. It places yet another cudgel in the hands of the bosses to drive down wage costs, while leaving workers vulnerable.

If workers are stood down but still “employed” they get no wages from the company but they are not entitled to claim unemployment benefits because they are “employed”. When the same bosses experience a boom in profits, are they going to share this success with their workers with a big wage increase? That’s not likely, and yet they want workers to share in the business risk but not the profits.

In an attempt to “close a loophole” the government will also legislate to prevent the accrual of annual or sick leave while working overtime. Leave will accrue for a maximum of 38 hours worked in any week, meaning that leave will accrue more slowly for many workers required to work regular overtime. In addition, sick/carer’s leave will only be paid at the base rate of pay, without penalty rates or regular overtime factored in, meaning that workers who are sick, or needed to care for a sick family member will lose money for taking leave in many cases.

The final amendment relieves business of the responsibility of maintaining detailed records of hours worked by staff. Records of overtime and other extra payments will still have to be kept. Justified it as reducing “red tape” for business, ACTU secretary Greg Combet said that “in the event there is a dispute, this will make it harder for workers to argue that they have been underpaid”.

The amendments will not be the last that the federal government is likely to make to Work Choices. “We’ll continue to finetune the legislation, there could be more changes”, Howard told the ABC on November 13. Finance minister Nick Minchin also admitted as much to the HR Nichols Society in March, when he told them: “We do need to seek a mandate from the Australian people at the next election for another wave of industrial relations reform”.

Susan Price, National Tertiary Education Union activist and Socialist Alliance candidate for the NSW legislative council told Green Left that unless Work Choices is met with “stiff resistance” from the union movement, Canberra is certain to continue “bulldozing our rights at work”.

“The High Court’s rejection of the states’ challenge to Work Choices doesn’t let them off the hook though either. These laws need to be resisted at all levels. [NSW Labor Premier] Iemma and the other Labor premiers have to mount a campaign of non-cooperation with these laws. He could start by giving public servants paid time off to attend the November 30 rallies.

“He could pledge that state government employees will not be forced to abide by any aspects of the Work Choices law. He could pledge that no state government contract will be given to a company that doesn’t have a union agreement or that insists on Australian Workplace Agreements. That would show that state Labor doesn’t support these anti-worker laws”, Price concluded.