Lieberman and the Decline of Israeli Democracy by URI AVNERY 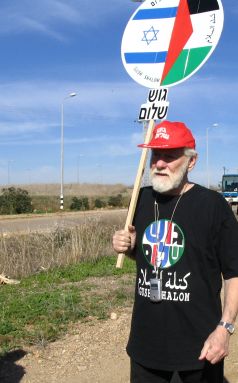 In its original German form - Liebermann - the name means "lovable man". It is hard to imagine a name less appropriate for the new Deputy Prime Minister of Israel.

He is not lovable, neither in his personality nor in his views - and that is the understatement of the year.

His personal lovability can be judged by the fact that he was once arrested for beating up a boy who had quarreled with his son.

This week, the arrival of Liberman at the center of the political system marks the start of a new chapter in the annals of the State of Israel.

The time is not accidental. In all the 56 years of its existence, Israeli democracy has never been at such a low point as it is today.

In the elections half a year ago, almost 40% of the electorate did not vote at all - double the usual percentage.

Since then, corruption affairs have followed each other. The President of the State is awaiting indictment on several charges of rape and sexual misconduct. The Prime Minister is the subject of a whole series of investigations for corruption, in collusion with an assortment of local and foreign billionaires. Two ministers are already standing trial. Over Ariel Sharon and his family, a dark cloud of corruption affairs was hovering when he suffered his stroke. There is a general feeling that the ruling group in Israel is cynical and corrupt.

The corruption and cynicism of this group expresses itself also in its public behavior. Politicians in Israel - and around the world - have never been notable for their fulfillment of election promises. But here this has reached a new low - everything is being betrayed quite openly, in full view of the public.

Ehud Olmert campaigned on the basis of a specific and detailed plan - the "Convergence". Now, without batting an eyelid, he announces that it has been abandoned. He has only one plan left: to stay in power, whatever it takes.

Amir Peretz collected votes as the leader who was about to carry out a real "social" revolution, to put an end to the oppression of the weak and the underprivileged - the elderly, the sick, the unemployed and all the rest. The gap between rich and poor in Israel is one of the widest in the industrialized world. Peretz also promised to work towards peace with the Palestinians.

On the morrow of the elections, Peretz betrayed his promises openly, shamelessly and with Chutzpa. In order to further his personal career, he did not claim any social ministry, accepting the Ministry of Defense instead. Since then, he has been demanding the expansion of the military budget at the expense of social outlays. Instead of peace, he made war. This week he also violated his undertaking not to sit in a government that includes Avigdor Liberman. Almost all the Labor Party ministers are partners to this blatant betrayal, with the honorable exception Ofir Pines-Paz, who has resigned. (Four of his colleagues in the Labor Party, including Ehud Barak, are competing to take his place.)

The first noteworthy act of the Olmert-Peretz team was to get Israel into a superfluous and hopeless war. The irresponsibility of this decision to start a difficult and complex war compares only with the irresponsibility with which the war itself was conducted in all its phases. To add insult to injury, they blocked the appointment of an independent Judicial Commission of Inquiry.

The war has left the public with a profound sense of distress, on top of the disgust aroused by the political betrayals and the corruption affairs. Our democracy now appears completely rotten, corrupt and incompetent. A Hebrew proverb says that "the breach in the wall calls for the thief". The present situation calls for fascist forces.

THE SPIN managers of Olmert and Peretz try to calm us down. What's so special about Liberman, they ask us.

So he advocates Transfer, the expulsion of the Arab citizens from Israel. He threatened to destroy Egypt by blowing up the Aswan Dam. He demanded the execution of the Israeli Arab Knesset members for meeting with Syrian and Hamas leaders. So what? Rehavam Ze'evi, whose memory was honored this week by a special commemoration session of the Knesset, proposed ethnic cleansing, and General Effi Eytam, the chief of the National Union party, uses similar language.

Such a person should not be allowed to enter the government? Why not? After all, Liberman has already been a member of the government, and so had Ze'evi and Eytam.

This argument misses the point. The Liberman who joined Sharon's government five years ago represented a marginal group of new immigrants, which was not taken seriously. Sharon was a strong leader, and his ministers were unimportant. But the Liberman that has joined the Olmert government is something else: the leader of a strong party that is getting stronger, under a Prime Minister who is a small party functionary, with whom most of the public is fed up.

The Liberman party is quite different from the fictitious Kadima Party and the decomposing Labor Party. It is organized on military lines, with Liberman as its one, unquestioned leader. It has organized most of the immigrants from the former Soviet Union, and is expanding into other communities, too. It appeals to the poor and downtrodden. It resembles the Bolshevik party that Liberman knew as a young man in the Soviet Union. (To coin a formula: Bolshevism minus Marxism equals Fascism.)

When the democratic system arouses public contempt, and when the view that "all politicians are crooks" and "the system is rotten to the core" is gaining ground, such a person is a real danger to democracy.

This has been the basis of Israeli policy from the very beginning. The main argument for Sharon's "Separation" and Olmert's "Convergence" was exactly this: that in order for Israel to remain Jewish and democratic, it must give up those parts of the occupied Palestinian territories with a dense Arab population.

The extreme Right has an answer that resembles the egg of Columbus: all three aims can indeed be attained. The solution is ethnic cleansing - the expulsion of the whole of the Arab population.

That is difficult to carry out in a democratic system. Therefore, this aim almost automatically means that there must be a "strong leader". Meaning: an overt or disguised dictatorship.

Mostly this is not said openly, but by hints accompanied with a wink. Liberman, too, does not say so openly. But if one listens closely to what he says, one can draw the conclusions oneself.

THE MOST depressing phenomenon at this moment is the lack of public reaction.

The betrayal of the Labor Party could have been expected. Amir Peretz did indeed swear that he would never sit in a government with Liberman, but in order to remain a minister he is quite prepared to sell his principles. No great outcry could be expected from Meretz either, after Yossi Beilin had his well publicized breakfast with Liberman and heaped praise on him and his herrings.

But the general public does not seem shocked, either. Here and there some articles did appear, but they did not point out the existential danger threatening the Israeli republic. Even the Arab public in Israel, whose very existence is menaced by Liberman, has not set in motion a real protest. On the 1976 "Land Day", when the Arab citizens protested against the expropriation of their land, it looked different. As it did in October 2000, when the Israeli Arab public protested against a suspected threat to the al Aqsa mosque.

What is the reason for this weak reaction, which is so like the last days of the Weimar republic?

There is a growing disdain for the democratic system. There is a general fatigue after the shocks of the last year. There is a withdrawal into private cares. For the "persons in the street", it is difficult to imagine the dangers. He and she are so used to democracy, that they cannot imagine what it means to live without it. They are sure that "It Can't Happen Here".

Perhaps they are right?

At the end of the 19th century, there was a French general called Georges Boulanger. Everybody expected him to carry out a military coup d'etat at any moment. But the general hesitated, postponed the much talked-about coup again and again, until somebody threw in his face: "General, at your age Napoleon was already dead!" It is said that this broke the spell, the authorities started to take action and the general fled abroad.

Perhaps Liberman will also turn out to be a scarecrow. But I would not bet on it, if the Israeli public does not wake up in time.

Uri Avnery is an Israeli writer and peace activist with Gush Shalom. He is one of the writers featured in The Other Israel: Voices of Dissent and Refusal. He is also a contributor to CounterPunch's hot new book The Politics of Anti-Semitism.
Posted by John/Togs Tognolini at Monday, November 06, 2006