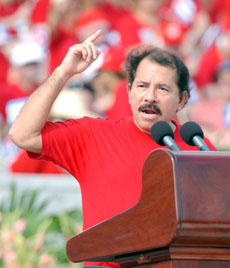 More than two decades after they first swept to power, Daniel Ortega and the Sandinistas appear poised for victory in Nicaragua's presidential elections.

Despite heavy-handed interference from the US, which has actively campaigned against Mr Ortega, the 60-year-old former president is eight to 10 points ahead of his rivals, just days away from Sunday's vote. Polls suggest he is less than one point away from the 35 per cent he needs to win in the first round and avoid the need for a run-off.

"It's a different time," Mr Ortega said this week. "We are at peace. Sixteen years have passed since the war ended... and I ask God to give us a chance to govern in peace together, without political differences."

If Mr Ortega secures victory he will do so despite remarkable interference from the US, whose ambassador in Nicaragua, Paul Trivelli, has been outspoken in his disapproval of the Sandinista leader and in support of Eduardo Montealegre, the candidate for the National Liberal Alliance who is currently placed second in the polls. Mr Ortega's previous attempts at securing the presidency, which he lost in 1990, have also met with strident US opposition.

The US has a long and bloody history of interference in Nicaragua. In the Eighties, the administration of Ronald Reagan spent an estimated $300m (£160m) to provide arms and support to Contra rebels who launched a brutal war against the Sandinista government, leading to the deaths of up to 30,000 people. At the time of the Sandinistas' victory in the 1984 election, Mr Reagan said Nicaragua was only "two days" from Brownsville, Texas - implying that the Sandinistas represented a direct threat to the US. He also said the Contras were the "moral equivalent of our Founding Fathers".

While Mr Ortega has regularly criticised American interference during this campaign, he has also spoken of reconciliation and portrayed himself as someone who will be able to create jobs and boost the country's economy, which is heavily dependent on trade with Washington. He has also portrayed himself as a devout Catholic, and has spoken often about social issues.

Larry Birns, the director of the Washington-based Council on Hemispheric Affairs, said Mr Ortega might be able to look for help in bolstering the economy from Hugo Chavez, the leader of Venezuela - especially if the US goes ahead with its threat to withdraw aid in the event of a victory for the Sandinistas. But he added: "I think Ortega will have problems in resisting demands made by Sandinista unions for wage increases and land grants."

Mr Ortega completed his campaign in ebullient mood. At a massive rally in the capital, Managua, he reportedly told supporters that the fireworks going off were "the lights of victory".

Trailing Mr Ortega, who is on 34 points, and Mr Montealegre, who is on 23, are the former vice-president Jose Rizo, and the Sandinista dissident Edmundo Jarquin. Last is Edén Pastora, a former Sandinista fighter known as Comandante Zero.