The Mufti and the Dog Whistle by Shane Elson 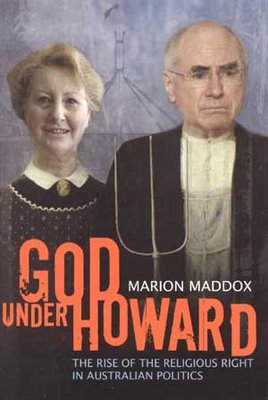 So much is going on one really struggles to work out where to start. First
there's the climate. Today its warm, tomorrow it might be cold. Yesterday
was sunny, tomorrow it might rain. Last week the PM, said climate change was
a fallacy and lie made up by feminist, gay, unemployed, tree hugging, lefty
pinko, Marxists. This week he announces a bunch of projects that are
supposed to cut green house gasses.

Six years ago there were boat loads of neo-fascist, terrorist sympathisers
in boats trying to storm our northern borders. This year our Foreign
Minister argues that more 'skilled' migrants should be allowed in without a
bunch of red tape to get through.

Last week a Muslim cleric threw a few misguided words around and was duly
reprimanded by many of his faith. Some years ago Tony Evans, from the far
right Christian "men's" movement Promise Keepers said, ". . . I believe that
feminists of the more aggressive persuasion are frustrated women unable to
find the proper male leadership".

If you weren't aware of who Promise Keepers are, they're an
ultra-conservative, fundamentalist Christian "men's" movement, funded
initially by James Dobson of "Focus on the Family" fame who also espouses an
anti-women message. Dobson is recognised by many in the far right as being a
guru on family relationships and parenting. However his "biblical values"
approach demands that women be subservient to men, that children should be
physically abused by smacking and that the real scourge of our age is
homosexuality.

Joseph Wakim, writing in The Age reminds us that last month the Pope (a Nazi
sympathiser) told an audience that Muslims were "bad and inhuman" and that
the only way Muslims spread their faith is by "blood". Wakim goes on to note
that our PM responded to the Pope's inflammatory words by dismissing them.

On the ABC's LateLine program on September 19th Howard said, in his defence
of the Pope's speech, "I think we should all take a deep breath on these
things and all have a sense of proportion. We seem to be living in a world
where people have no sense of proportion. Okay, they don't like what was
said, I'm sure that the Pope was not intending to attack Islam."

Joseph Wakim goes on to note two things about Howard's comments. Firstly
that, "the Prime Minister selectively applies a voice of reason" and that,
secondly, he does so because of his use of "dog whistle" politics. In other
words, Howard wants to create an "us" and "them" mentality so that he can
signal to certain groups who he considers to be with "us" and against
"them".

Wakim picks up very nicely the fact that Howard only ever refers to our
Muslim brothers and sisters as part of "us" when their representatives agree
with him and his world view. However, for most of the time, as far as Howard
and his ilk are concerned, the Muslim community in Australia is to be
referred to in the third person as either "they" or "them".

By setting up this dichotomy Howard is able to send out various messages in
the form of code words and phrases that, on first appearance, seem to mean
one thing when really they are intended to mean something else for the
audience he is targeting.

As has been made very clear in all the reputable media, the vast majority of
Muslim community leaders who have spoken about the Mufti's words, have
condemned them as in no way representing the wider Muslim community's views.
I suggest that their comments can also be applied to the many Christians who
took offence at what the Pope said about Islam and to what the Promise
Keepers say about women.

I've said before that Howard's time as Prime Minister will be looked back
upon as one of the most divisive times in Australian history. His use of dog
whistle politics has been the most hurtful and spiteful development in
political rhetoric in my lifetime.

Marion Maddox in her extremely useful book "God Under Howard: The Rise of
the Religious Right in Australian politics" refers to US critic, Cynthia
Burack's explanation of the way in which the Christian right uses dog
whistle politics. She notes, "Christian right leaders 'practice small
duplicities - such as apologies - in order to be misunderstood by the "major
population"' while simultaneously signalling a more extreme position to a
right wing fringe".

In the case of so much of the Howard governments way of doing business the
flips and flops that Labor were accused of seem like the flipping and
flopping of the little creatures that jump around when you remove the rock
under which they hide.

Whether its the policy, speeches or statement on climate change, immigration
and asylum seekers or the Muslim community among us, Howard is like an
untethered ship in a storm, blown about by wind and always trying to find
the right way up. Rather than being a leader, he is victim to the tide of
public opinion his narrow minded world view dictates.

Maddox writes in the closing chapter of her book that, "by legislating to
bring out our best rather than our worst in our interactions, governments
can make us nicer. And they can make us nastier. By penalising some . by
sponsoring show trials, . by draconian national security laws, . by
dividing . Howard might keep winning elections but, in between, he has not
entirely had his way with Australia's soul".

Joseph Wakim makes the point that perhaps Mufti Taj al-Din al-Hilali was set
up by some within the Muslim community who wanted him out, "the reformers"
he calls them. He also notes, with perhaps a sense of irony, that "perhaps
the dog whistle was from these savvy reformers, the tail wagging the dog,
knowing exactly what bite it would ultimately unleash. And perhaps our
leader, John Howard, did not blow the first dog whistle, but played along to
someone else's tune."

I think he right. Howard was outflanked and as Maddox points out,
Australian's will not be fooled all the time. The policy vacillations, the
increasing pressure being brought to bear by our international allies (such
as Britain's frustration over the policies on climate change) and the
growing weariness of many in our community at the carping, bitching,
scapegoating and finger pointing we call 'politics', bodes well for change.
The question is, will we be there to bring it on?
Posted by John/Togs Tognolini at Wednesday, November 01, 2006