The Destabilization of Pakistan by Prof. Michel Chossudovsky 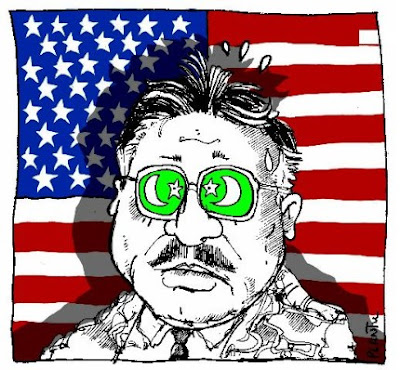 [Part Two: Pakistan and the "Global War on Terrorism" at http://www.globalresearch.ca/index.php?context=va&aid=7746]The assassination of Benazir Bhutto has created conditions which contribute to the ongoing destabilization and fragmentation of Pakistan as a Nation.
The process of US sponsored "regime change", which normally consists in the re-formation of a fresh proxy government under new leaders has been broken. Discredited in the eyes of Pakistani public opinion, General Pervez Musharaf cannot remain in the seat of political power. But at the same time, the fake elections supported by the "international community" scheduled for January 2008, even if they were to be carried out, would not be accepted as legitimate, thereby creating a political impasse.
There are indications that the assassination of Benazir Bhutto was anticipated by US officials:
"It has been known for months that the Bush-Cheney administration and its allies have been maneuvering to strengthen their political control of Pakistan, paving the way for the expansion and deepening of the “war on terrorism” across the region.

Various American destabilization plans, known for months by officials and analysts, proposed the toppling of Pakistan's military...
The assassination of Bhutto appears to have been anticipated. There were even reports of “chatter” among US officials about the possible assassinations of either Pervez Musharraf or Benazir Bhutto, well before the actual attempts took place. (Larry Chin, Global Research, 29 December 2007)
Political Impasse
"Regime change" with a view to ensuring continuity under military rule is no longer the main thrust of US foreign policy. The regime of Pervez Musharraf cannot prevail. Washington's foreign policy course is to actively promote the political fragmentation and balkanization of Pakistan as a nation.
A new political leadership is anticipated but in all likelihood it will take on a very different shape, in relation to previous US sponsored regimes. One can expect that Washington will push for a compliant political leadership, with no commitment to the national interest, a leadership which will serve US imperial interests, while concurrently contributing under the disguise of "decentralization", to the weakening of the central government and the fracture of Pakistan's fragile federal structure.
The political impasse is deliberate. It is part of an evolving US foreign policy agenda, which favors disruption and disarray in the structures of the Pakistani State. Indirect rule by the Pakistani military and intelligence apparatus is to be replaced by more direct forms of US interference, including an expanded US military presence inside Pakistan. This expanded military presence is also dictated by the Middle East-Central Asia geopolitical situation and Washington's ongoing plans to extend the Middle East war to a much broader area.

The US has several military bases in Pakistan. It controls the country's air space. According to a recent report: "U.S. Special Forces are expected to vastly expand their presence in Pakistan, as part of an effort to train and support indigenous counter-insurgency forces and clandestine counterterrorism units" (William Arkin, Washington Post, December 2007).
The official justification and pretext for an increased military presence in Pakistan is to extend the "war on terrorism". Concurrently, to justify its counterrorism program, Washington is also beefing up its covert support to the "terrorists."
The Balkanization of Pakistan
Already in 2005, a report by the US National Intelligence Council and the CIA forecast a "Yugoslav-like fate" for Pakistan "in a decade with the country riven by civil war, bloodshed and inter-provincial rivalries, as seen recently in Balochistan." (Energy Compass, 2 March 2005). According to the NIC-CIA, Pakistan is slated to become a "failed state" by 2015, "as it would be affected by civil war, complete Talibanisation and struggle for control of its nuclear weapons". (Quoted by former Pakistan High Commissioner to UK, Wajid Shamsul Hasan, Times of India, 13 February 2005):
"Nascent democratic reforms will produce little change in the face of opposition from an entrenched political elite and radical Islamic parties. In a climate of continuing domestic turmoil, the Central government's control probably will be reduced to the Punjabi heartland and the economic hub of Karachi," the former diplomat quoted the NIC-CIA report as saying.
Expressing apprehension, Hasan asked, "are our military rulers working on a similar agenda or something that has been laid out for them in the various assessment reports over the years by the National Intelligence Council in joint collaboration with CIA?" (Ibid)
Continuity, characterized by the dominant role of the Pakistani military and intelligence has been scrapped in favor of political breakup and balkanization. According to the NIC-CIA scenario, which Washington intends to carry out: "Pakistan will not recover easily from decades of political and economic mismanagement, divisive policies, lawlessness, corruption and ethnic friction," (Ibid) .
The US course consists in fomenting social, ethnic and factional divisions and political fragmentation, including the territorial breakup of Pakistan. This course of action is also dictated by US war plans in relation to both Afghanistan and Iran.
This US agenda for Pakistan is similar to that applied throughout the broader Middle East Central Asian region. US strategy, supported by covert intelligence operations, consists in triggering ethnic and religious strife, abetting and financing secessionist movements while also weakening the institutions of the central government.
The broader objective is to fracture the Nation State and redraw the borders of Iraq, Iran, Syria, Afghanistan and Pakistan.
Pakistan's Oil and Gas reservesPakistan's extensive oil and gas reserves, largely located in Balochistan province, as well as its pipeline corridors are considered strategic by the Anglo-American alliance, requiring the concurrent militarization of Pakistani territory.
Balochistan comprises more than 40 percent of Pakistan's land mass, possesses important reserves of oil and natural gas as well as extensive mineral resources.
The Iran-India pipeline corridor is slated to transit through Balochistan. Balochistan also possesses a deap sea port largely financed by China located at Gwadar, on the Arabian Sea, not far from the Straits of Hormuz where 30 % of the world's daily oil supply moves by ship or pipeline. (Asia News.it, 29 December 2007)
Pakistan has an estimated 25.1 trillion cubic feet (Tcf) of proven gas reserves of which 19 trillion are located in Balochistan. Among foreign oil and gas contractors in Balochistan are BP, Italy's ENI, Austria's OMV, and Australia's BHP. It is worth noting that Pakistan's State oil and gas companies, including PPL which has the largest stake in the Sui oil fields of Balochistan are up for privatization under IMF-World Bank supervision.
According to the Oil and Gas Journal (OGJ), Pakistan had proven oil reserves of 300 million barrels, most of which are located in Balochistan. Other estimates place Balochistan oil reserves at an estimated six trillion barrels of oil reserves both on-shore and off-shore (Environment News Service, 27 October 2006) .
Covert Support to Balochistan SeparatistsBalochistan's strategic energy reserves have a bearing on the separatist agenda. Following a familiar pattern, there are indications that the Baloch insurgency is being supported and abetted by Britain and the US. The Baloch national resistance movement dates back to the late 1940s, when Balochistan was invaded by Pakistan. In the current geopolitical context, the separatist movement is in the process of being hijacked by foreign powers.
British intelligence is allegedly providing covert support to Balochistan separatists (which from the outset have been repressed by Pakistan's military). In June 2006, Pakistan's Senate Committee on Defence accused British intelligence of "abetting the insurgency in the province bordering Iran" [Balochistan]..(Press Trust of India, 9 August 2006). Ten British MPs were involved in a closed door session of the Senate Committee on Defence regarding the alleged support of Britain's Secret Service to Baloch separatists (Ibid). Also of relevance are reports of CIA and Mossad support to Baloch rebels in Iran and Southern Afghanistan. It would appear that Britain and the US are supporting both sides. The US is providing American F-16 jets to the Pakistani military, which are being used to bomb Baloch villages in Balochistan. Meanwhile, British alleged covert support to the separatist movement (according to the Pakistani Senate Committee) contributes to weakening the central government.
The stated purpose of US counter-terrorism is to provide covert support as well as as training to "Liberation Armies" ultimately with a view to destabilizing sovereign governments. In Kosovo, the training of the Kosovo Liberation Army (KLA) in the 1990s had been entrusted to a private mercenary company, Military Professional Resources Inc (MPRI), on contract to the Pentagon. The BLA bears a canny resemblance to Kosovo's KLA, which was financed by the drug trade and supported by the CIA and Germany's Bundes Nachrichten Dienst (BND). The BLA emerged shortly after the 1999 military coup. It has no tangible links to the Baloch resistance movement, which developed since the late 1940s. An aura of mystery surrounds the leadership of the BLA.