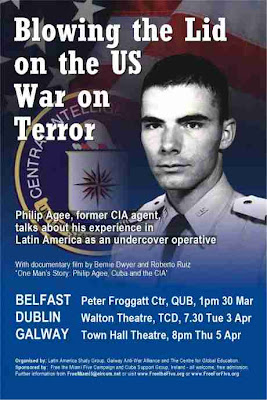 Philip Agee (July 19, 1935 – died in Cuba on January 7, 2008. He was a US Central Intelligence Agency case officer and writer, best known as author of the 1975 book, Inside the Company: CIA Diary, detailing his experiences in the CIA. Agee joined the CIA in 1957, and over the following decade had postings in Washington, D.C., Ecuador, Uruguay, and Mexico. After resigning from the Agency in 1968, he became a leading opponent of CIA practices.

His belief in the CIA began to shake in Uruguay in 1965, when the US president Lyndon Johnson invaded the Dominican Republic with U.S. military forces. The Dominican revolution was put down, Agee argued, "not because it was Communist but because it was nationalist."

Agee stated that his Roman Catholic social conscience had made him increasingly uncomfortable with his work by the late 1960s leading to his disillusionment with the CIA and its support for authoritarian governments across Latin America. He and other dissidents took encouragement in their stand from the Church Committee (1975-6), which cast a critical light on the role of the CIA in assassinations, domestic espionage, and other illegal activities.

In the book Agee condemned the 1968 Tlatelolco massacre in Mexico City and wrote that this was the immediate event precipitating him leaving the agency. This was the student protest just before the Mexico City Olympics, where anywhere from 200 to 300 people where killed by police when they shot into the demonstration. Mexican government sources said, "4 Dead, 20 Wounded".

Because of legal problems in the US, in 1975, Inside the Company was first published in Britain, while Agee was living in London. It was eventually published worldwide, in 27 different languages. US Playboy Magazine, August 1975, published excerpts from his book in the article titled What You Still Don't Know About The CIA! Ex-Company Man Philip Agee Tells All.

The London Evening news called Inside the Company: CIA Diary "a frightening picture of corruption, pressure, assassination and conspiracy". The Economist called the book "inescapable reading". Miles Copeland, Jr., a former CIA station chief in Cairo, said the book was "as complete an account of spy work as is likely to be published anywhere" and it is "an authentic account of how an ordinary American or British 'case officer' operates . . . All of it . . . is presented with deadly accuracy."

The book was delayed for six months before being published in the United States, it became an immediate best seller. The head of the Western Hemisphere Division of the CIA, Ted Shackley, was tasked with stopping the publication of Agee's CIA Diary. Inside the Company identified CIA officers, agents, front companies and organisations. By the way, Shackley served in US Embassy in Canberra during Whitlam's government.

Agee's first overseas assignment was in 1960 in Ecuador where his primary mission was to force a diplomatic break between Ecuador and Cuba, no matter what the cost to Ecuador's shaky stability, using bribery, intimidation, bugging, and forgery. Agee spent four years in Ecuador penetrating Ecuadorian politics. He states that his actions subverted and destroyed the political fabric of Ecuador.
On December 12, 1965 Agee visited senior Uruguayan military and police officers at a Montevideo police headquarters. He realized that the screaming he heard from a nearby cell was the torturing of an Uruguayan, a name he had given to the police as someone to watch. The Uruguayan senior officers simply turned up a radio report of a soccer game to drown out the screams.

On January 12, 1975, Agee testified before the second Bertrand Russell Tribunal in Brussels that in 1960 he had conducted personal name checks of Venezuelan employees for a Venezuelan subsidiary of Exxon. Exxon was "letting the CIA assist in employment decisions, and my guess is that those name checks... are continuing to this day." Agee stated that the CIA customarily performed this service for subsidiaries of large U.S. corporations throughout Latin America. An Exxon spokesman denied Agee's accusations.

Until his death, Agee ran a website in Havana, Cubalinda.com which uses loopholes in American law to arrange holidays to Cuba for American citizens, who are generally prohibited by the Trading with the Enemy Act statute of US law from spending money in Cuba.

Agee said in Inside the Company, “ Reforms of the FBI and the CIA, even removal of the President from office, cannot remove the problem. American capitalism, based as it is on exploitation of the poor, with its fundamental motivation in personal greed, simply cannot survive without force - without a secret police force. ”
Excerpts from the book CIA Diary Inside the Company by Philip Agee
Posted by John/Togs Tognolini at Tuesday, January 15, 2008