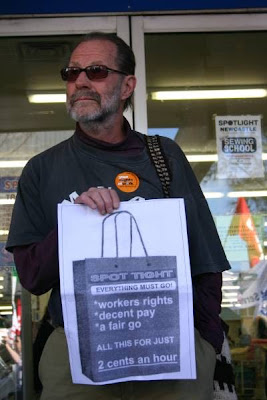 Peter McGregor died in Sydney on Friday 11 January.A long standing activist of anarchist persuasion, Peter had been a lecturer in media studies at UWS until his retirement in 2005.

Totally unsectarian and extremely generous with his time and money, Peter (pictured left)supported and was a member of, many causes and organisations. His activism included involvement in the anti-apartheid movement, Vietnam, Palestine and Timor solidarity, NTEU, Search, Exit, civil liberties, Anti-war, Green Left (as an original sponsor and regular street seller) and Socialist Alliance (founding member, former National Executive member and a Newcastle convenor).

The widely-felt great respect for Peter was indicated last December when a wide range of activists and colleagues from across the left political spectrum attended his 60th birthday party. Many moving tributes were paid to him that day, by everybody from the DSP to the ALP members, including a Catholic priest.

In recent months Peter had become a `nightmare of conscience' for Ruddock and Howard, having attempted to arrest both on a citizen's warrant for war crimes.

We have lost an invaluable comrade, activist and friend.Johanna, Peter's partner of 20 years, was still very much in shock when we spoke and said that the funeral will probably be held in Newcastle next Saturday.

As soon as details become available we'll pass them on.

Labels: Socialism Now More Than Ever