Suharto, the model killer, and his friends in high places by John Pilger 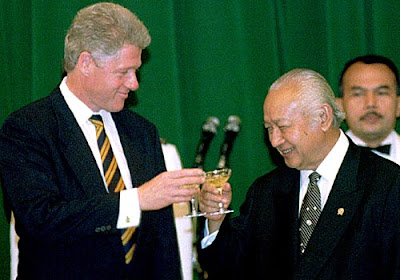 Bill Clinton and Suhatro in 1994

In an article for the Guardian, John Pilger says the death of General Suharto, the former dictator of Indonesia, is an opportunity to review the role of this "model" for high crimes in the modern era - from Indonesia, to Chile, to Vietnam - and the powerful friends who ensured he would never suffer the fate of Saddam Hussein.

In my film 'Death of a Nation', there is a sequence filmed on board an Australian aircraft flying over the island of Timor. A party is in progress, and two men in suits are toasting each other in champagne. “This is an historically unique moment,” says one of them, “that is truly uniquely historical.” This is Gareth Evans, Australia’s foreign minister. The other man is Ali Alatas, principal mouthpiece of the Indonesian dictator, General Suharto. It is 1989, and the two are making a grotesquely symbolic flight to celebrate the signing of a treaty that allowed Australia and the international oil and gas companies to exploit the seabed off East Timor, then illegally and viciously occupied by Suharto. The prize, according to Evans, was “zillions of dollars”.

Beneath them lay a land of crosses: great black crosses etched against the sky, crosses on peaks, crosses in tiers on the hillsides. Filming clandestinely in East Timor, I would walk into the scrub and there were the crosses. They littered the earth and crowded the eye. In 1993, the Foreign Affairs Committee of the Australian Parliament reported that “at least 200,000” had died under Indonesia’s occupation: almost a third of the population. And yet East Timor’s horror, which was foretold and nurtured by the US, Britain and Australia, was actually a sequel. “No single American action in the period after 1945,” wrote the historian Gabriel Kolko, “was as bloodthirsty as its role in Indonesia, for it tried to initiate the massacre.” He was referring to Suharto’s seizure of power in 1965-6, which caused the violent deaths of up to a million people.

To understand the significance of Suharto, who died on Sunday, is to look beneath the surface of the current world order: the so-called global economy and the ruthless cynicism of those who run it. Suharto was our model mass murderer – “our” is used here advisedly. “One of our very best and most valuable friends,” Thatcher called him, speaking for the West. For three decades, the Australian, US and British governments worked tirelessly to minimise the crimes of Suharto’s gestapo, known as Kopassus, who were trained by the Australian SAS and the British army and who gunned down people with British-supplied Heckler and Koch machine guns from British-supplied Tactica “riot control” vehicles. Prevented by Congress from supplying arms direct, US administrations from Gerald Ford to Bill Clinton, provided logistic support through the back door and commercial preferences.

In one year, the British Department of Trade provided almost a billion pounds worth of so-called soft loans, which allowed Suharto buy Hawk fighter-bombers. The British taxpayer paid the bill for aircraft that dive-bombed East Timorese villages, and the arms industry reaped the profits. However, the Australians distinguished themselves as the most obsequious. In an infamous cable to Canberra, Richard Woolcott, Australia’s ambassador to Jakarta, who had been forewarned about Suharto’s invasion of East Timor, wrote: “What Indonesia now looks to from Australia …is some understanding of their attitude and possible action to assist public understanding in Australia...”

Covering up Suharto’s crimes became a career for those like Woolcott, while “understanding” the mass murderer came in buckets. This left an indelible stain on the reformist government of Gough Whitlam following the cold-blooded killing of two Australian TV crews by Suharto’s troops during the invasion of East Timor. “We know your people love you,” Bob Hawke told the dictator. His successor, Paul Keating, famously regarded the tyrant as a father figure. When Indonesian troops slaughtered at least 200 people in the Santa Cruz cemetery in Dili, East Timor, and Australian mourners planted crosses outside the Indonesian embassy in Canberra, foreign minister Gareth Evans ordered them destroyed. To Evans, ever-effusive in his support for the regime, the massacre was merely an “aberration”. This was the view of much of the Australian press, especially that controlled by Rupert Murdoch, whose local retainer, Paul Kelly, led a group of leading newspaper editors to Jakarta, fawn before the dictator.

Here lies a clue as to why Suharto, unlike Saddam Hussein, died not on the gallows but surrounded by the finest medical team his secret billions could buy. Ralph McGehee, a senior CIA operations officer in the 1960s, describes the terror of Suharto’s takeover of Indonesia in 1965-6 as “the model operation” for the American-backed coup that got rid of Salvador Allende in Chile seven years later. “The CIA forged a document purporting to reveal a leftist plot to murder Chilean military leaders,” he wrote, “[just like] what happened in Indonesia in 1965.” The US embassy in Jakarta supplied Suharto with a “zap list” of Indonesian Communist Party (PKI) members and crossed off the names when they were killed or captured. Roland Challis, the BBC’s south east Asia correspondent at the time, told me how the British government was secretly involved in this slaughter. “British warships escorted a ship full of Indonesian troops down the Malacca Straits so they could take part in the terrible holocaust,” he said. “I and other correspondents were unaware of this at the time... There was a deal, you see.”

The deal was that Indonesia under Suharto would offer up what Richard Nixon had called “the richest hoard of natural resources, the greatest prize in south-east Asia”. In November 1967, the greatest prize was handed out at a remarkable three-day conference sponsored by the Time-Life Corporation in Geneva. Led by David Rockefeller, all the corporate giants were represented: the major oil companies and banks, General Motors, Imperial Chemical Industries, British American Tobacco, Siemens and US Steel and many others. Across the table sat Suharto’s US-trained economists who agreed to the corporate takeover of their country, sector by sector. The Freeport company got a mountain of copper in West Papua. A US/ European consortium got the nickel. The giant Alcoa company got the biggest slice of Indonesia’s bauxite. America, Japanese and French companies got the tropical forests of Sumatra. When the plunder was complete, President Lyndon Johnson sent his congratulations on “a magnificent story of opportunity seen and promise awakened”. Thirty years later, with the genocide in East Timor also complete, the World Bank described the Suharto dictatorship as a “model pupil”.

Shortly before he died, I interviewed Alan Clark, who under Thatcher was Britain’s minister responsible for supplying Suharto with most of his weapons. I asked him, “Did it bother you personally that you were causing such mayhem and human suffering?”“No, not in the slightest,” he replied. “It never entered my head.”

“I ask the question because I read you are a vegetarian and are seriously concerned about the way animals are killed.”

“Doesn’t that concern extend to humans?”