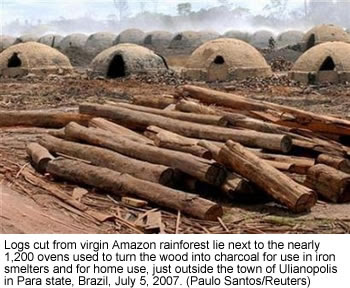 The Brazilian government has announced a huge rise in the rate of Amazon deforestation, months after celebrating its success in achieving a reduction.

Gilberto Camara, of INPE, an institute that provides satellite imaging of the area, said the rate of loss was unprecedented for the time of year.

“We’ve never before detected such a high deforestation rate at this time of year,” Mr Camara said.

His concern, outlined during a news conference in Brasilia on Wednesday, was echoed by Environment Minister Marina Silva.

Ms Silva said rising prices of raw materials and commodities could be spurring the rate of forest clearing, as more and more farmers saw the Amazon as a source of cheap land.

“The economic reality of these states indicate that these activities impact, without a shadow of a doubt, on the forest,” she said.

The state of Mato Grosso was the worst affected, contributing more than half the total area of forest stripped, or 1,786 sq km (700 sq miles).

The states of Para and Rondonia were also badly affected, accounting for 17.8% and 16% of the total cleared respectively.

The situation may also be worse than reported, with the environment ministry saying the preliminary assessment of the amount of forest cleared could double as more detailed satellite images are analysed.

President Luiz Inacio Lula da Silva is due to attend an emergency meeting on Thursday to discuss new measures to tackle deforestation in the Amazon.

Even as he celebrated the success, though, environmentalists were warning that the rate was rising again.