US Troops Will Be In Iraq for 10 More Years By PATRICK COCKBURN Baghdad. 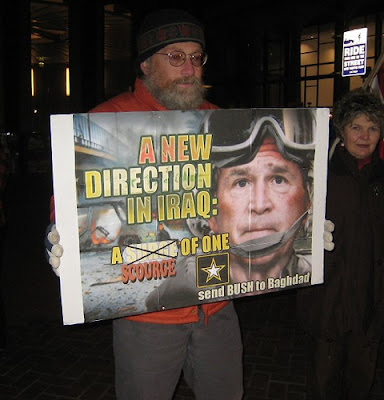 US military forces will not stay in Iraq for anything like as long as some American politicians are demanding, says the Iraqi Foreign Minister, Hoshyar Zebari. He said crucial issues about "Who is in charge in Iraq--we or you?" would be settled in negotiations between Iraq and the United States, starting this month.
The Republican presidential candidate, Senator John McCain, caused anger among Iraqis this month by saying during the New Hampshire primary that US military forces might stay in Iraq "for 100 years". Mr Zebari, asked by The Independent in Baghdad if the American army would be in Iraq in 10 years, said: "Really, I wouldn't say so."
Mr Zebari is much more confident than he was a year ago that "al-Qa'ida has been crushed, its network has been shattered" though it has not been completely eliminated. He says he thinks it dangerous if the Shia-Kurdish government, of which he is one of the most powerful members, does not pay and absorb into its own security forces the 70,000-strong Sunni Awakening movement which is fighting al-Qa'ida.
"That is the danger," said Mr Zebari. "The Awakening movement is not that well organized and it could be easily manipulated by al-Qa'ida." He added that it was an illusion that the Sunni political parties and their leaders "represent the Sunni community".
Mr Zebari originally made his name as the energetic spokesman and foreign representative of the Kurdistan Democratic Party during its long years of resistance to Saddam Hussein. He has been the most successful of Iraqi ministers since he was appointed in 2004, cultivating good relations with the US and Iran. Three years ago, insurgents tried to assassinate him using a vehicle packed with a ton of explosives, including a naval torpedo, which was detected near his home before it was detonated.
For all Mr Zebari's optimism, Iraq remains an extraordinary violent country. Yesterday, a suicide bomber in a police uniform killed Brigadier-General Salih Mohammed Hasan, the chief of police of Mosul, northern Iraq's largest city. He had been inspecting the ruins of a building in which 20 civilians had been killed and 150 wounded in an explosion the previous day.
The Iraqi leaders are eager to sign by July a bilateral treaty with the US which would in effect determine who rules Iraq. It would settle issues such as Iraqi sovereignty, command and control of Iraqi security forces, and the immunity of foreign troops and private security companies. The Iraqi intelligence service, at present controlled and financed by the CIA, will be brought under Iraqi government control.
Above all, said Mr Zebari, "the duration of the American presence here will be negotiated ... so their presence will not be open-ended". Although sovereignty was theoretically returned to Iraq in June 2004, the US remains very much in charge of security.
Mr Zebari says that he has no doubt that the new agreement would be denounced as a sell-out in Iraq, but it was necessary for Americans and Iraqis to end uncertainty about their future relations.
The Foreign Minister sees US support for the Iraqi government as being essential to prevent foreign invasion. "If we did not have the Americans here we would have seen many interventions by our neighbors, the latest of which was the massing of the Turkish troops [on Iraq's northern border]."
Syria has also made it more difficult for al-Qa'ida members to cross into Iraq and Iran has restrained the Shia militias and cut back on sending sophisticated Iranian-made roadside bombs into Iraq. "We convinced many countries that you are playing with fire, you have a snake by the tail" in supporting the insurgency in Iraq, says Mr Zebari.
Paradoxically, Iran is a strong supporter of the present government in Baghdad, which is dominated by religious parties from the majority Shia community. But Iran is a rival of the US for influence over the Iraqi government and does not want to see a threatening American army permanently encamped in Iraq and on its borders. Mr Zebari has tried to foster dialogue between Tehran and Washington, though with mixed success. But he is convinced that Iran has played a crucial role in restraining the Mehdi Army, the powerful Shia militia at present observing a ceasefire. Baghdad has invited the Iranian President, Mahmoud Ahmadinejad, to visit Iraq.
Mr Zebari would not confirm reports that Iran has recently taken a tougher line, postponing talks with US representatives several times in recent weeks. This follows a US National Intelligence Estimate saying that Iran is not developing a nuclear bomb.
The Iranians may also be worried that the Awakening movement is a US-run Sunni militia that will never give its loyalty to a Shia government.
from http://www.counterpunch.org/ 25-1-08
Patrick Cockburn is the author of 'The Occupation: War, resistance and daily life in Iraq', a finalist for the National Book Critics' Circle Award for best non-fiction book of 2006. His forthcoming book 'Muqtada! Muqtada al-Sadr, the Shia revival and the struggle for Iraq' is published by Scribner in April.
Posted by John/Togs Tognolini at Sunday, January 27, 2008