Madness Compounding Madness-Calls for Intervention in Pakistan By GARY LEUPP 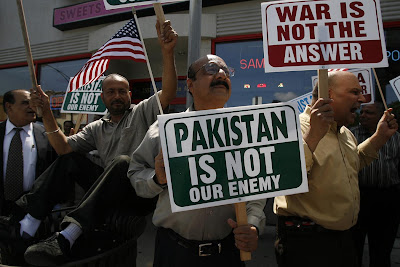 "Al-Qaeda is now as much a Pakistani phenomenon as it is an Arab or foreign element," declares Najam Sethi, editor of Pakistan's Daily Times. It is not just the Arabs, Uzbeks and other foreigners who fled from Afghanistan into Pakistan in the wake of the U.S. invasion of late 2001. It draws in Pakistani tribesmen, Punjabis, Urdu speakers. What was once a group foreigners (numbers unknown) enjoying Pashtun hospitality under the Taliban in Afghanistan has struck roots in neighboring Pakistan. It's hard to say whether or not Pakistan is now its main base, since it is also reviving in regions of Afghanistan quietly retaken by its Taliban hosts over the last couple years. But it seems the people of the frontier provinces of Pakistan, with deep ethnic and cultural ties to Afghanistan, are deeply upset about the cowboy imperialism of the U.S. that has brought so much suffering to the region. These provinces are often described as "lawless," since the Pakistani state has never really brought them under central control and has relied upon tribal leaders to maintain stability. But now they are the most unstable areas in a country increasingly destabilized in the aftermath of Benazir Bhutto's assassination.

For all this, we have to thank George W. Bush. Was his administration unaware of the fact that Islamist militants driven from Afghanistan would receive a welcome across the border? That both the Taliban and al-Qaeda would find this zone a prime recruiting ground? That the continuing occupation of Afghanistan and "counterinsurgency" war would insure high sympathy for the Islamist forces? That the government of Pervez Musharraf, caving into U.S. threats and cooperating with the U.S. imperial project, would find itself weakened, ever more despised by its people? That the dictator having seized power in a coup would not seek, under stress, to further augment his power by such measures as tampering with the judiciary and declaring martial law? That such measures would only deepen the Pakistani crisis?

Did Bush, or the neocons surrounding him and whispering in his ears, expect that the entire Afghan people would be grateful for the U.S. bombing, occupation, restoration of the Northern Alliance and installation of a powerless puppet in Kabul? That the neighboring Pakistanis would share their joy and appreciation for the American presence? That the Taliban would just disappear? That Pakistan's military and Inter-Service Intelligence (having helped create the Taliban and maintaining warm ties with it, but forced to sever ties with it lest---as the Americans threatened---they be "bombed back to the Stone Age") would following their about-face eagerly make war on these former allies and coreligionists?

I cannot answer these questions. I'm inclined to think Bush may have really thought he could get away with his invasion of Afghanistan (and then Iraq) without producing all this blowback. I'm less inclined to think that the bulk of the neocons (recognizing some differences among them) were so naïve. Frankly, I don't think they care that much. They're willing to generate infinite "create chaos" in the Muslim world, repeating on Fox News with their affected learnedness, smug impatience with conventional wisdom, and general contempt for the "reality mode" that things are going well in the "war on terror." That the U.S. needs to courageously, heroically take further action, such as an attack on Iran, or strikes against targets in Pakistan, to produce more chaos.

The recent NIE has apparently, to the deep chagrin of the neocons praying for an Iran attack, reduced the likelihood that that attack will occur. (I don't want to suggest we lower our guard against such an eventuality, but plainly conflicts within the elite have stymied the neocons' effort to produce regime change in Tehran during Bush's presidency.) But now some of them are campaigning for intervention in Pakistan to fight the Islamic extremism Bush policy itself daily fosters. This is their madness at its peak. Pakistan is no Iraq, bled for a decade by sanctions before invasion. Nor is it even Iran, hobbled by limited sanctions grudgingly imposed by the world as a result of U.S. arm-twisting. It's a country of 165 million people twice the size of California, bordering India, China and Iran as well as Afghanistan. Its military is the seventh largest in the world, and of course, possesses nuclear weapons. The top brass, while secular and often western-educated, has strong links to Islamists. Among the masses, admiration for Osama bin Laden is high.

The editors of the New York Times, that "newspaper of record" that brought us the massive fear-mongering disinformation campaign about Iraq's weapons of mass destruction, has following Bhutto's assassination editorialized that the Bush administration needs to do something about Pakistan. It has, the editors declare, the "option of using American prestige and resources to fortify Pakistan's badly battered democratic institutions. . . must now call for new rules to assure a truly democratic vote"---as though the unelected U.S. president has any business telling other countries how to conduct fair elections. "The United States cannot afford to have Pakistan unravel any further American policy must now be directed at building a strong democracy in Pakistan." Is not the subtext here that if Musharraf disappoints the administration, he should lose aid, and thus have less ability to fight the bourgeoning Islamist forces in his country, producing more unraveling, thus providing a pretext for U.S. military action?

In a perhaps not unrelated development, neocon and chief Iraq War propagandist Bill Kristol has been hired by the New York Times as a columnist in 2008. He told Fox News last July, "I think the president's going to have to take military action there over [in Pakistan] in the next few weeks or months. Bush has to disrupt that [al-Qaeda] sanctuary. I think, frankly, we won't even tell Musharraf. We'll do what we have to do in Western Pakistan and Musharraf can say, 'Hey, they didn't tell me.'" Notice how he leaves the Pakistani people and their reaction to such "action"---military aggression against a sovereign state--- entirely out of the picture.

This is madness compounding madness, offered as respectable commentary in the mainstream press.

Gary Leupp is Professor of History at Tufts University, and Adjunct Professor of Comparative Religion. He is the author of Servants, Shophands and Laborers in in the Cities of Tokugawa Japan; Male Colors: The Construction of Homosexuality in Tokugawa Japan; and Interracial Intimacy in Japan: Western Men and Japanese Women, 1543-1900. He is also a contributor to CounterPunch's merciless chronicle of the wars on Iraq, Afghanistan and Yugoslavia, Imperial Crusades.

He can be reached at: gleupp@granite.tufts.edu