Rudd and Reality in Afghanistan by John Tognolini 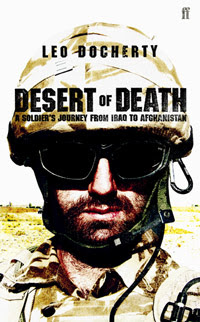 Just before Christmas we all witnessed prime minister Kevin Rudd, in his army desert camouflage jacket, talking to Australian soldiers in Afghanistan. We’ve been told repeatedly by the ALP that the war there is the “good war against terrorism” unlike the war in Iraq.

"I fear what the new year might bring," Rudd told soldiers in central headquarters at Kabul air base. In regard to deaths of two Australian soldiers who have died there since early last October. Rudd justifies their deaths by saying "But our advice and our conviction is that this is a job worth doing."

During his Christmas visit 390 Australians serving in the NATO-led task force in the southern province of Oruzgan, he committed Australia to staying put for long haul and urged NATO countries to increase their troop numbers amid fears the Taliban is regaining control in some areas. Does this mean that Rudd is going to put more Australian soldiers into Afghanistan?

It is some what strange that the North Atlantic Treaty Organisation that didn’t fire a shot in anger during the whole Cold War against the Soviets, can be such a cheap mercenary outfit for the oil company Unocal in one of the poorest countries in the world. So they could build and protect a pipeline running across Afghanistan from the Caspian Sea. One of Unocal’s employees happens to be the President of Afghanistan, Hamid Karzai who is also known as the mayor of Kabul.

One voice we haven’t heard in the Australian media has been ex-Scots Guard Captain, Leo Docherty, he resigned from the British army in protest over the war in Afghanistan and Iraq and wrote his book last year, 'Desert of Death: A Soldier's Journey from Iraq to Afghanistan'.

He say’s of arriving on the ground in Iraq with the Scots Guards, “Our turn soon came, and the ground truth in Basra and Maysan provinces [in Iraq] was a shock. The statue-toppling euphoria had been replaced by the horrific chaos of a state in collapse, exacerbated by a rising insurgency and sectarian bloodshed. The truth gradually emerged. The police and army we were training were corrupt and probably loyal to the insurgency. The first supposedly democratic elections for half a century were a façade, dependent on the presence of our Warrior fighting vehicles at polling stations.”“Then we realised the issue was not replacing tyranny with democracy, but gaining long-term access to oil. Blair, in bowing to American oil-mad energy hunger, had deployed the British Army on a lie, a much bigger lie than the one about WMDs. Today, the appalling sectarian violence killing hundreds of Iraqi civilians every week is the direct result of our invasion and botched occupation. As Blair prepares to leave office, Iraq is descending into deeper human tragedy, and British troops are still dying.”

Docherty thought that going to Afghanistan would be the “Good War” compared to Iraq. He say’s “Those in the forces who, like me, were frustrated and disillusioned after Iraq, took new optimism from British intervention in Afghanistan. It looked like being everything Iraq should have been: reconstructive nation-building to improve the lives of poverty-stricken Afghans. Sadly, political ill-preparation and haste dropped the military, again, into lethally hot water. Last year, British forces were sent into volatile Helmand, ill-equipped and inadequately supported. Scattered across the north of the province (the size of Wales), small teams occupied "platoon houses" in remote towns.”

“I was in Sangin where, as in everywhere else, we had no means of starting developmental reconstruction and stood no chance of winning Afghan hearts and minds. To the locals, the presence of British soldiers seemed to presage destruction of their poppy crop and their livelihoods. The Taliban are thriving on this: every Afghan civilian killed by the British artillery round or helicopter gunship has a dozen brothers, cousins, and friends seeking British blood for vengeance. Today, our troops are risking their lives in a pointless conflict, a nightmare scenario of counter-insurgency gone wrong.” Says Docherty.

Is Rudd and the Australian Defence Force going to tell us that Australian weaponry doesn’t have the same political impact and return?

“All those people whose homes have been destroyed and sons killed are going to turn against the British,” he said. “It’s a pretty clear equation — if people are losing homes and poppy fields, they will go and fight. I certainly would. We’ve been grotesquely clumsy — we’ve said we’ll be different to the Americans who were bombing and strafing villages, then behaved exactly like them.” Say's Docherty.

Helmand produces 40 per cent of Afghanistan's opium crop, the source of 90 per cent of global heroin. And the people there are tribesmen, infamous for their ferocious hostility to foreign interference. The savage backlash rages still; it’s claimed more than 50 British servicemen killed there. And countless Afghan civilians have been killed. Opium production hasn’t stopped it’s at a record high.

“Now the ground has been lost and all we’re doing in places like Sangin is surviving,” said Docherty. “It’s completely barking mad. We’re now scattered in a shallow meaningless way across northern towns where the only way for the troops to survive is to increase the level of violence so more people get killed. It’s pretty shocking and not something I want to be part of.”
“We soldiers once assumed our political bosses would not lie to us. We realised the actual issue was about long-term access to oil.” Say’s Docherty.

You can see and hear Leo Docherty for yourself at http://www.youtube.com/watch?v=IAJrssteYxE
Posted by John/Togs Tognolini at Tuesday, January 15, 2008