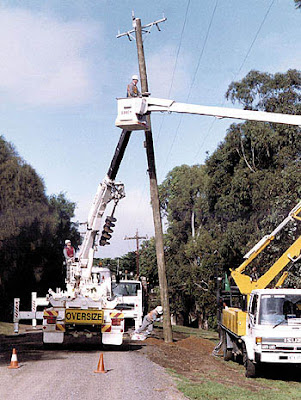 Privatisation of any aspect of the state's electricity service or its infrastructure should be ardently opposed. Revenue raised from production and supply of electricity for the government to be re-distributedinto our public schools, public hospitals, public transport and other services will be delivereddirectly into the hands of the private sector who have no social responsibility to the Australian public.

Despite the great performance of our public schools and hospitals, they are in desperate need of upgrading. It is socially irresponsible for any government to sell its assets, particularly a money spinner such as the electricity.

The next implication for NSW residents, as demonstrated historically both in Victoria and abroad (Thatcher’s England and San Fransisco for example), is the increased costs and decreased efficiency.

The private sector has only one imperative and that isthe profit imperative.

It is in the corporate sector's interests, as we saw clearly with the support by the Business Council of Australia for the HowardGovernments' Workchoices regime, that profits are gained at the expense of employees' wages and conditions. Any employees who manage to maintain their jobs in a privately owned institution are subject to the provisions deemed appropriate by the employer and the basic protections and entitlements that public service workers enjoy currently may easily be removed.How different would this be for these employees than if they were subjected to the Coalitions’ Workchoices?

The ALP machine needs to take heed of the message of the community about Howard's neo-liberal policieswhich were rejected and take heed that the community will fight this issue as vehemently as they fought against the attack on our working lives.

As public service employees, teachers should be in solidarity with other public sector workers and seethat disadvantaging one group is an attack on all.

Unions kicked the campaign off with a mass meeting of electricity delegates late last year. Now, a mass delegates meeting of all public sector unions to co-ordinate the next stage of the campaign with maximum rank and file involvement and participation is needed, if we are to prevent the sell off of this vital publicly owned asset.

Resolutions should be passed at Union and Community meetings to call on Unions NSW to urgently organise a bigger response to this issue than theYR@W response. Serious leadership is required as the vote Howard out – vote ALP in strategy is not an option this time!

Stop The Sell Off of the NSW Power Industry
Posted by John/Togs Tognolini at Tuesday, January 15, 2008