Mark Steel: I know, let's sell weapons to a lunatic 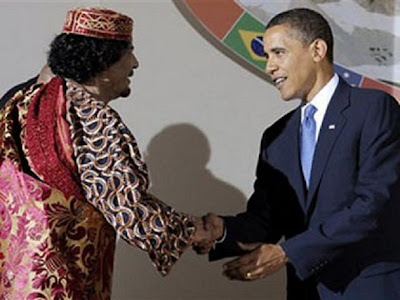 The Western leaders now condemning Colonel Gaddafi as a madman must be perplexed as to what's gone wrong with him, because up until a month ago they obviously thought he was perfectly sane and well-balanced – otherwise they wouldn't have sold him all those tanks. They must wonder if the stress of being a dictator has got to him, and if he'd had a fortnight off and started yoga all this trouble could have been avoided.
So maybe the best way to intervene is to send him a good shrink. Then they could make a report for the UN that went: "His desire to refer to his fellow Libyans as 'Cockroaches' who must be killed suggests the patient is experiencing the trauma of feeling he's a woman trapped in a Colonel's body. And the need to make speeches while under an umbrella is a classic symptom of Obsessive Compulsive Disorder, so maybe we shouldn't send him any tanks for at least three weeks, until he's better."
They should have been prepared for this, because they all said he was mad for 30 years, then suddenly decided he was rational about 10 years ago, by coincidence around the time he announced he'd back the West in the war on terror. To be fair, some of those who embraced him at this time are impressively unrepentant. For example, Peter Mandelson insists when Gaddafi renounced his desire for weapons of mass destruction we had to "bring him into the fold" with deals for oil and arms.
Because when a dictator tells you he no longer wants destructive weapons, what else can you do but welcome his change of heart, by selling him a desertful of destructive weapons? It's like wandering up to someone at Alcoholics Anonymous and saying: "Congratulations on finally renouncing drink. Now to celebrate let's go and get pissed."
Blair told us in 2007 "the commercial relationship between Britain and Libya is going from strength to strength". So everything was ideal, we could let a dictator sell us oil and buy our arms because he'd backed our war against a dictator, who used to sell us oil and buy our arms. If Saddam had said in 2001 he was willing to back our war against Gaddafi we'd have got so confused we'd have declared war on ourselves.
The people who defend the befriending of Gaddafi, such as Douglas Alexander, the shadow foreign secretary, insist he promised he wouldn't use weapons such as tear gas "against his own people", which seems a liberal attitude towards someone you've derided as a madman for 30 years. Presumably Blair said to him: "Now I'm trusting you here, so if you DO open fire on thousands of protesters demanding a minimum wage, you'll not just be letting me down, you'll be letting yourself down."
In any case, who did we imagine Gaddafi might use this tear gas against? Perhaps he said: "Ah Mister Blair, I fear at any moment we might be invaded by a nation of badgers."
So now we expect the rebels to be grateful if we offer them our services, because when Britain wants to help by sending an army into an Arab country, what could possibly go wrong? It's like the builder who burned your house down ringing to say: "I hear you need your house rebuilt. We can offer very reasonable rates."
So the rebels seem to be aware that while the West can offer expert advice on the weaponry they're up against, seeing as it was the West that made it, on the other hand being supported by the British and American army won't help their aim of winning mass popularity amongst the Libyan people.
Because British and American leaders spent weekends with Gaddafi and arranged trade deals and hugged him for the press, and yet at no time did anyone spot he was in any way the sort of character you shouldn't send weapons to. And, in fact, even if he'd announced he had a split personality and then started talking in a high pitched voice insisting he was Sandra from Wolverhampton, Blair would have thought: "This is excellent news. We can sell tanks to both of them."
Posted by John/Togs Tognolini at Wednesday, March 09, 2011