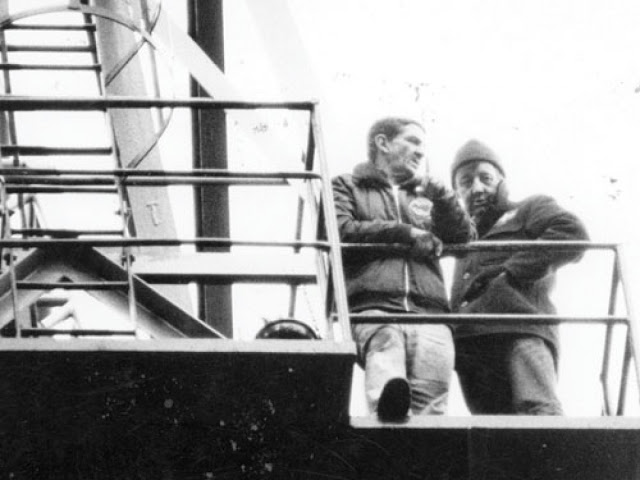 Killer with the beanie & The Black Rat during their crane occupation in April 1986.
Picture this scene, late April 1986, a group of a dozen builders labourers on a cold Melbourne morning. The time is around 7.30am. Their picketing a building site where they’ve been sacked for refusing to resign from their union the Builders Labourers Federation, that has just been deregistered. A “nice term” for outlawed by Bob Hawke’s ALP federal government. Hawke is joined in this by the ALP premiers of New South Wales and Victoria, Neville Wran and John Cain. An army of police has been deployed to building sites in Melbourne, Geelong, Canberra, Sydney, Wollongong and Newcastle to attack the right of freedom of association. The right of workers to be in a union of their choice, not the bosses or the state.

BLF organiser John ‘Cummo’ Cummins, has just driven up to the picket. I notice as he opens the boot of his car, a large steel chain and he shows it to Neville ‘Killer’ Kane and Jimmy ‘The Black Rat’ Wilson and third Builders Labourer. Within ten minutes, the three sacked BLF men have occupied a crane on a nearby building site. They’ve used the chain to lock the trap door of the crane to prevent police from removing them. They have no food or water and occupy the crane for over 72 hours and leave it on their terms after making a defiant protest and shutting a building site down. They have also endured three bitterly cold nights.

As Killer said,” It happened really fast. I was on the Market Street site and they [the cops] came down on the job... I was sacked because I refused to join the BWIU [Building Workers Industrial Union, now the CFMEU]. I could have been the shop steward on site for the BWIU. All I had to do was to change over. But I decided to stick with the BLs.” Other workers were locked on the jobs, surrounded by rows and rows of police and threatened with the sack, threatened that they couldn’t leave the site till they’d signed over to another building union.

So it’s not surprising that when Killer lost his fight with leukemia last week that a few days later, that 175 construction workers on a Melbourne CBD building site gave him a minutes silence. Or that the Red Flag flying over Melbourne Trades Hall was at half mast for him. That flag has been sent to Killer’s widow Margaret. Over 400 people attended Killer’s funeral on Monday April 2 which had Sinn Fein’s Gerry Adams send a message to it, recognising Killer’s life long support of the Irish fight against British Imperialism.

In many ways Killer, reflected the staunch, militant working class traditions of the BLF. The union was a rank and file membership controlled organisation. It’s no wonder that Hawke and the ALP outlawed the BLF. Hawke did his best to criminalise militant unionism. It was he who created the Australian Billionaires with the greatest redistribution of wealth in Australian history and the working poor. Killer and men and women like him opposed that in the 1980’s. With being in the BLF, he and about 500 of us suffered for our militant dissent with being blacklisted and starved out of work.

Margaret, his lifelong wife and partner was actively involved in organising the wives and girlfriends of BLF men during the outlawing of the union. She once appeared on Ray Martin’s Midday Show,a national television show and Martin basically surrendered his show to her with her elegant defense of the BLF. This is interview is in my film The Deregistration of the Builders Labourers Federation-The Victorian Story 1986-1992.

I would have made the 830 kilometer trip from Wellington in Central West NSW to attend Killer’s funeral in Melbourne, if it was not for my partner’s recovery from cancer. However, I was fortunate enough to catch up with Killer and Margaret last September after the Melbourne Climate Change/Social Change conference at their home in Longwarry. I played my guitar to them and sung my version of Roaring Jack’s Lads of the BLF that was played at Killer’s funeral. I also played them Back Home in Derry, that is the poem The Voyage written by Irish Hunger Striker Bobby Sands, and made famous as song by Christy Moore and played some Johnny Cash.

In remembrance of Killer but also for the other BLF Stalwarts who are no longer with us such as John ‘Cummo’ Cummins and Jimmy ‘The Black Rat’ Wilson. DARE TO STRUGGLE. DARE TO WIN. IF YOU DON’T FIGHT. YOU DON’T WIN.
Posted by John/Togs Tognolini at Friday, April 06, 2012