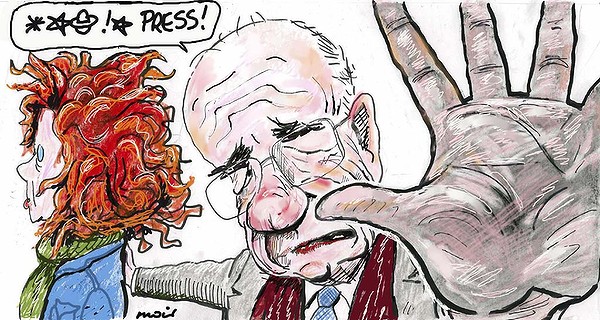 As the Murdochs are selling off their plant at Wapping, it should be bought by English Heritage the way they do with other shut-down workplaces, and turned into "The News International Experience".

Visitors could be offered headphones with a commentary that plays as they go round, saying: "Hi, I'm Bob Hoskins, and I've seen some right goings-on round the East End I can tell yer, but what they got up to in 'ere takes the bloomin' biscuit. Come with me on a journey through the grime, the backhanders and the porky pies for a tale of right slippery so-and-sos, you wouldn't believe."

There could be an interactive section where you ask questions to actors playing Rupert and James and see if you can get them to remember anything they've ever done. And children could be given one of those sheets of paper with a series of questions to answer from what they see on the way round, to see if they've got what it takes to be a top policeman. If they throw it away and say, "There's no point in trying to find anything out", they pass.

It would have the impact of museums about slavery or the First World War, where people sign a book as they leave, adding comments such as: "We must never let this horror happen again." Then at the gift shop you could buy a story written about yourself based on messages hacked from your phone as you were queuing to pay.

The other possibility is News International will keep the building and turn it into one of these new free schools. To pass history, students will have to write an essay on The Battle of Waterloo, giving an objective and accurate view in not more than 20 words. They'll get an A* if they put: "It's Napoleon Torn-apart. Our boys give frogs the Wellington boot."

As future visitors wander round the museum, the question they may ask is why did so many people let him walk all over them, to the extent that Alastair Campbell's deputy described Rupert Murdoch as the 24th member of his cabinet? Blair might dispute this, arguing: "No he wasn't. Gaddafi was the 24th member, Murdoch was third, then came Bush, Berlusconi, Cliff Richard and, at the back, the Foreign Secretary."

Partly it may be Murdoch benefited from an old tradition among British politicians, of bravely standing up to tyrants, as long as they've already been overthrown. Then they're fearless, condemning apartheid or Victorian mill owners or Nero with not a thought for their own safety. It just seems to be that minority of tyrants who still have power they have difficulty with.
So for 30 years the political system in Britain cowed to him, especially when Fortress Wapping was created, as the reason he moved there was to destroy the print unions. The argument was that we couldn't carry on letting printers get paid ridiculous amounts. So I wonder what Murdoch did with all those printers' wages he saved. I haven't looked it up but I imagine he gave it to old blind people and a leper colony. It's also possible that history might be different if proper trade unions had existed inside Wapping. Because everyone seems to agree now that the culture inside News International made it impossible for anyone to object to the company's methods and stay in the job, which a union could have resisted.

You can tell how powerful that culture is from the way that even now it carries on, because in the past six months News International has used private investigators to follow the lawyers that are trying to sue them. It's as if they can't help it, it's a compulsive disorder, and if they were stranded on a desert island they'd be planting bugs to listen in to the parrots, who would wonder why there was a story written about them having a row with a chimpanzee.

For their own safety the board of News International should be confined to a cage in the new Wapping museum, where Bob Hoskins can encourage children to point at them and poke them with sticks.