ACTU congress — what can it deliver? by Tim Gooden 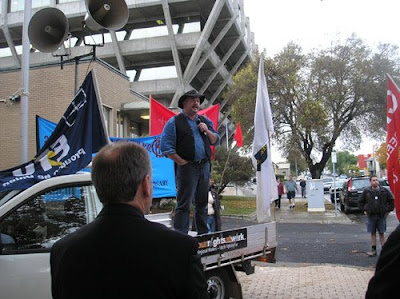 “Delivering for all Working Australians” was the slogan for the 2009 Australian Council of Trade Unions congress held June on 2-4. This raises the question — what if you are not working or an Australian citizen? But the congress will not be remembered for such philosophical questions — there were many more immediate issues at stake.

Questions like: will the Rudd Labor government keep the Howard-era laws that have been designed and used to weaken unions in the building industry?

Or the broader question of whether the union movement will be able to get the federal government to improve its industrial relations laws in this term of government or at least the next.

Currently the government is saying that the new industrial laws, which come into force on July 1 this year, are the best we unionists are going to get: there will be no more discussion, let alone improvement.

The big problem is that everyone in the union movement knows the new laws are only marginally better than Work Choices and many of the provisions are the same with different headings.

This leaves unions and workers in almost the same position as under Howard. Many wonder why we all worked so hard in our orange “Your Rights at Work” T-shirts to get rid of Howard and the Coalition’s laws. The same laws being presented to us with a different name.

Howard outlawed industry-wide agreements and made it impossible for unions in the building industry to comply with its secret ballot laws.

In Victoria, where there are 5000 employers in the commercial building industry alone, this meant each union organiser would have had to negotiate, write up, organise workplace votes on and register industrial agreements once every two days to cover all workers in the industry!

Howard knew this was impossible to comply with. Rudd and industrial relations minister Julia Gillard know it too.

The Australian Building and Construction Commission (ABCC) was set up to make sure the unions were prosecuted for not complying with the impossible.

Such restrictions on union activity leaves workers at the mercy of employers. As a result the death rate of construction workers in Australia has risen.

But the situation did not go unaddressed at the ACTU congress.

The congress had already made history by not having the leader of the ALP formally address it. Instead, Rudd spoke at a less formal dinner in the evening (where he received a standing applause).

At the congress itself the government sent along Julia Gillard to give unions the bad news. She was confronted with 650 delegates and officials wearing yellow T-shirts proclaiming “one law for all” and demanding the government abolish the ABCC.

In her speech Gillard espoused all the typical rhetoric about Australia being a great nation and how the ALP was leading the way for working families, etc.

But the main message was cold: the Rudd Labor government is not going to return workers all their rights at work.

Then just when everyone in the audience thought they’d heard it all, Gillard tried to justify keeping the ABCC laws with an attack on the sacked workers from the West Gate Bridge dispute for violence and damaging property.

She even claimed that they wore balaclavas, when it was actually the scabs who wore balaclavas. But the deputy PM (and former labour lawyer) was determined not to let the facts stand in the way of her anti-union laws.

It was at this point the delegates began hurling abuse and chanting “one law for all”, drowning out Gillard. This continued until ACTU president, Sharan Burrow, called the congress to order to allow the minister to finish her final two sentences.

It was originally planned to present the Gillard with an anti-ABCC petition signed by all congress delegates. But she was ushered off stage and out the side door before this could happen.

The shouting-down of Gillard and an ALP government’s policy was the second “first time in history” event at this year’s congress.

Since the congress some right-wing union leaders have come out in the media trying to clarify the government’s position for them.

Joe De Bruyn, national secretary of the shop assistants union said in the Australian on June 10 that the ALP really does have a mandate to keep oppressive laws against building workers.

Paul Howes, national secretary of the Australian Workers Union, appeared on Lateline to play down the importance of the disagreement and give the impression that not everyone is upset in the Labor family.

The big test now is whether the ACTU will be able to deliver real change on the ground for “working Australians” and for the building workers who face six months’ jail under the Rudd government.

[Tim Gooden is secretary of the Geelong Trades Hall Council and a member of the Socialist Alliance. Written in a personal capacity.]
From: Comment & Analysis, Green Left Weekly issue #798 17 June 2009.
Posted by John/Togs Tognolini at Sunday, June 28, 2009