So this is New Labour's legacy...They sacrificed all to get elected and now can't get elected to anything by Mark Steel 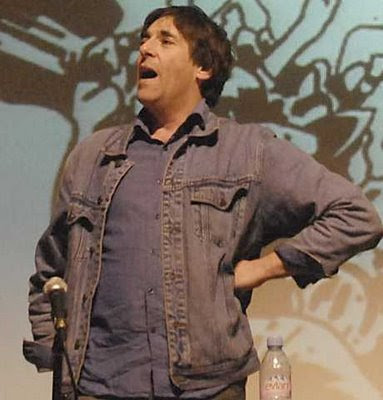 What a pathetic "rebellion". The Labour Party is in its worst state for a century and all it took for their leader to save himself was a sentence about finding a vision, and a promise he would "learn to listen". So after 10 years as Chancellor and two as PM he's going to start seeing and hearing. Next time he's challenged he'll promise to learn to crawl and eat solids.


Similarly his speech last Friday, when it seemed he needed to deliver an inspired and courageous flourish to save his job, was a bumbling splutter of incoherence that would have embarrassed a regional manager announcing the quarterly figures for envelope sales. If Gordon Brown had been Braveheart, his speech to his troops as the English started to charge would have gone "Now then – we are in a, er, er, a crisis of being attacked by archers that is in as much as it is global in its nature, which requires a global strategy of yes lances which is to say shields, but the Scottish people expect us to deal with that global and that is what I intend to to to do, er, do to."


But that was enough, because then most of his ministers made statements such as, "Of course the Prime Minister is fully aware he's a useless tosspot, but the others are even worse, so let's stop this in-fighting as there is still much work for this government to bugger up."


Because none of them, in all the billions of hours of interviews and intrigue, either for or against Brown, have said a single thing they believe their party should be doing. Instead they make statements about "needing to reconnect with voters" but to do that they'd have to come on television going, "I'm a bloody disgrace, I am. And you should see the expenses I rake in, alright for some ain't it. I'm never voting for me again, I can tell you."


But there's no clue about what they want to do differently. Their last seven years looks like one long fiasco, from Iraq to reverence for a disastrous banking system, but there's no one prepared even to suggest how they got in this mess and how it might be put right. So none of them can make a case for being any better, except for having a cheerier smile, so no one comes forward.


They might as well have a frog as their leader, and Ed Balls would be on Newsnight telling us the frog isn't the problem, and the way he responded to some sharp criticism by hopping off the table shows his determination, because they haven't got a clue. This is why they're in a much worse mess than the one in 1983. Back then, although the election was a disaster, the Labour Party had active branches in every area, with thousands of young members bursting with ideas of why they wanted to run local councils or the country. Now the branches barely exist, debate has been eliminated, and all that's left are careerists frightened of losing their careers.


For example, at four o'clock last Friday Caroline Flint was adamant she supported Brown, but two hours later she couldn't stand him. So either this was because she'd been snubbed for promotion, or she's genuine, and she honestly thinks he did a wonderful job for Labour for 15 years but then did one dreadful thing that negated all that, at around half past four.


This is New Labour's legacy. They sacrificed principles, debates, humanity, purpose and personality for the prize of getting elected. But now they can't get elected to anything so there is absolutely nothing left.

First published in The Independent on 10th June 2009
Posted by John/Togs Tognolini at Saturday, June 13, 2009