Responsibility and Integrity: the dilemmas we face by Noam Chomsky 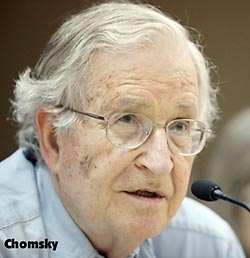 Noam Chomsky was born in Philadelphia and educated at the University of Pennsylvania, where he received his PhD. In 1955 he was appointed to the faculty of the Massachusetts Institute of Technology (MIT), where he has served as professor of foreign languages and linguistics. He has also taught courses and lectured at many universities throughout the world, including Oxford University. Besides his work in the field of psycholinguistics, Chomsky is also well-known as a leftist activist and social critic. He was an outspoken opponent of the Vietnam War and has remained critical of media coverage of politics.
Chomsky visited Utrecht on the invitation of the Graduate School of Humanities, the Utrecht Institute of Linguistics OTS, the Centre for the Humanities and the Treaty of Utrecht organisation. His lecture related to the 'Social Responsibility of the Artist' series developed jointly by the Centre for the Humanities and the Treaty of Utrecht Foundation.
Click on this to watch the videos of Noam Chomsky's talk.