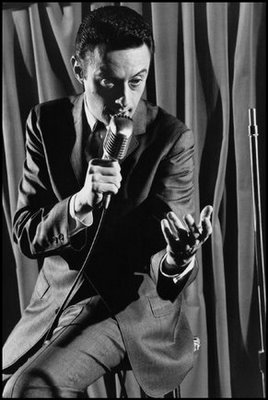 A lot of people say to me, "Why did you kill Christ?" "I dunno... it was one of those parties, got out of hand, you know." "We killed him because he didn't want to become a doctor, that's why we killed him."


All my humor is based upon destruction and despair. If the whole world were tranquil, without disease and violence, I'd be standing on the breadline right in back of J. Edgar Hoover.


Every day people are straying away from the church and going back to God.


I hate small towns because once you've seen the cannon in the park there's nothing else to do.


I won't say ours was a tough school, but we had our own coroner. We used to write essays like: What I'm going to be if I grow up.


If Jesus had been killed twenty years ago, Catholic school children would be wearing little electric chairs around their necks instead of crosses.


In the Halls of Justice the only justice is in the halls.


is where neon goes to die.


Satire is tragedy plus time. You give it enough time, the public, the reviewers will allow you to satirize it. Which is rather ridiculous, when you think about it.


The liberals can understand everything but people who don't understand them.


The only honest art form is laughter, comedy. You can't fake it... try to fake three laughs in an hour - ha ha ha ha ha - they'll take you away, man. You can't.

The role of a comedian is to make the audience laugh, at a minimum of once every fifteen seconds.

There are never enough I Love You's.

You know there's no crooked politicians. There's never a lie because there is never any truth.

Today's comedian has a cross to bear that he built himself. A comedian of the older generation did an "act" and he told the audience, "This is my act." Today's comic is not doing an act. The audience assumes he's telling the truth. What is truth today may be a damn lie next week.

When you're eight years old nothing is your business.

I'm sorry I haven't been funny. I am not a comedian. I am Lenny Bruce.

If something about the human body disgusts you complain to the manufacturer.

I don't know about you but I enjoy the way our tax money is being spent to arrest, indict, convict, imprison, parole, and re-imprison these people (marijuana smokers). I'd just piss away on beer any way."