The following quotes are from my new book Singing Johnny Cash in the Cardiac Ward
A personal story about heart disease and music. 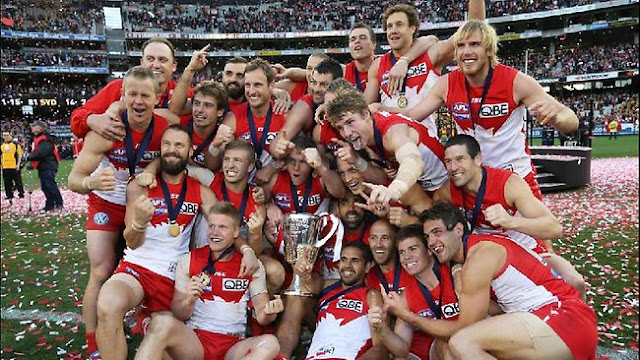 2012 Grand Final
“They say being a Sydney Swans/Bloods supporter is bad for one’s heart, because of the thrilling type of football the lads play. I watched them throughout the season, the finals and play in 2012 AFL Grand Final against Hawthorn in singer-songwriter Tex Perkin’s Post Office Hotel in Cobourg, in my hometown of Melbourne.  I believe I’m somewhat qualified to speak about them in regard to the health of the heart, particularly after watching them, with their gutsy, never-give-in style of football, win the Premiership Cup.


You see, I shouldn’t have been watching that game with my daughter Rachael, or her boyfriend Steve, or my partner Trish, or my good mate Johnny Clearly. Nor should I be writing this. I should be brown bread. Translating that good Cockney rhyming slang, which has become part of the Australian vernacular, I should be dead. I say this because of my jam tart, my heart. Thanks to modern medical science I’m still here, and it’s been proved beyond all reasonable doubt that I have one, a heart that is. To use the football term, I’m in extra time. But instead of a few minutes, I’m talking about maybe three decades. I’m 54 years old.


On October 28, 2011, I had a six-and-a-half hour heart operation. It was actually two operations, one to replace my aortic valve with a mechanical valve and one to graph my aortic artery (the main trunk from the heart that connects all the arteries). If I did not have these jobs done I would have been a dead man walking, the victim of a coronary aneurysm and certain heart failure ten months later.


That grand final was a heart thumping event for me and the millions of other people who watched it…….” 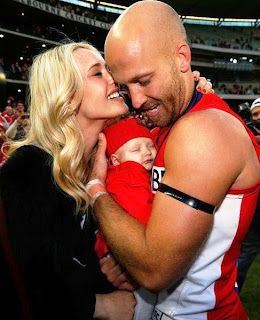 
Jarred McVeigh and his wife tragic loss
“In 2011, supporters of the Sydney Swans/Bloods, members of the AFL community, and people across New South Wales were sadden by the death due to heart disease of the baby daughter of Sydney co-captain Jarred McVeigh and his wife. In McVeigh’s absence, his team mates responded by defeating the Geelong Cats at their home ground, Kardina Park, also known as the House of Pain. It was Sydney’s first win against the Cats there in twelve years and, like everyone else who follows Sydney, I was gob-smacked. This was the first time any team had beaten Geelong on their home turf in four years. The death of the McVeigh’s daughter made me feel humble about my own heart problem and it showed the need for further research into early infant and child heart disease…..”


On alcohol
“I made the choice to give up alcohol as of June 15, 2012. I did this for a number of reasons, but the main one was that I want to be totally aware and alert about using the four medications that are part of my daily life now
There have been three occasions on which I must admit I’ve weakened. The first was in the Post Hotel, where I had one glass of champagne when Sydney won the grand final. I had been there since before noon with our little tribe of Sydney Swans/Bloods supporters. The second glass of champagne was the next day in Melbourne’s Altona, to celebrate my friends Natalie and Stuart getting the keys to their new home. We ate a take away feast of fine Sudanese food from Footscray’s African Town Cafe Bar & Restaurant. The third glass of champagne was at Sydney University, when my daughter Rachael graduated with her Bachelor’s Degree in Health Science. Apart from these three indiscretions I have not had a drop. Seriously, if you can name the three places in more than six months where you had a drink, you’ve given up the grog…”
On smoking
“Education campaigns against smoking need to be expanded. They actually work. The Sunday after the 2012 AFL Grand Final, I was at the old South Melbourne Albert Park Oval, the spiritual and ancestral home of the Sydney Swans, with my daughter Rachael and her boyfriend, Steve. We and about six thousand others were there to see the team with the AFL Premiership Cup before they flew back to Sydney. One of my fellow Bloods supporters made the comment, “You know what? I haven’t seen anyone smoke a cigarette. The Swans anti-smoking campaign is working.” Rachael, Steve and I had been there since 7.30am and as we left at 10.30am I realized that in all that time we had not seen one person in that red and white army light up.” 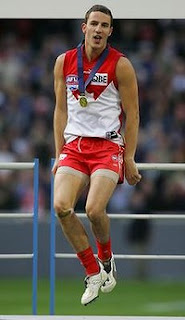 On the Irishman Champion Tadhg Kennelly
“This tiredness was starting to hit me physically. At home I couldn’t walk the 500 meters to the shops without catching a taxi back. I was hit by it when I went to the last Sydney Bloods/Swans game for the 2011 season, against the Brisbane Lions at the Sydney Cricket Ground, with Rachael and Steve. It was the last game played there by the great Irishman from Kerry, Tadhg Kennelly, the only holder of both an AFL Premiership medallion (2005) and a Senior All-Ireland Championship medal (2009).  That’s the Holy Grail for any player in both football codes and competitions. Trish and I had seen both of them at Canberra’s National Museum during its More Than Just Ned Exhibition about the Irish in Australia. Kennelly’s last game for Sydney was in the Semi-Final defeat to Hawthorn at the Melbourne Cricket Ground, which ended Sydney’s 2011 Finals Campaign.
As we were walking away from the SCG along Cleverland Street to find a pub in Surry hills for dinner, the exhaustion and tiredness started. I was trying to keep this symptom of my heart disease hidden from Rachael, a sort of stupid machismo on my part, yet here I was keeping pace with two twenty one year olds. Rachael had never seen me in a frail state and I wasn’t going to start then. It was a foolish thing to do on my part, but fortunately we soon found a good pub to have a feed in, the Dome Bar in Crown Street.” 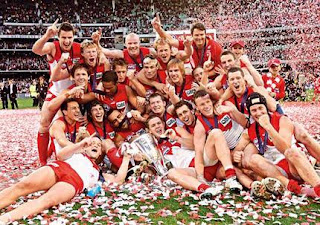 2005 Grand Final
“The recovery time in Randwick was good. In the mornings I went to get coffees from Coluzzi’s Café in High Street. I met Luigi Coluzzi, the champion Italian boxer who brought real espresso coffee to Sydney at his first café in William Street, Kings Cross, in the 1950s. Luigi had a Sydney Swans 2005 premiership win poster up on the wall….” 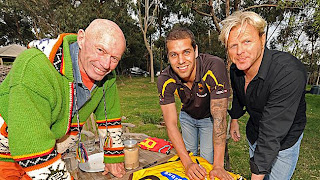 Don Scott,with the two other Hawthorn champions  Lance Franklin and  Dermott Brereton, he's shared the Hawthorn jumper twenty three with. Don Scott is one reason why I wrote this book.
”In writing this account I want to encourage people, especially men, to get their hearts checked out. There are many men who are not aware that they have a heart condition, let alone one that can kill them. There is a general reluctance among men to take our health issues seriously, not only in relation to the heart, but also other health issues that have a high fatality count, such as prostate cancer. As prostate cancer survivor and Hawthorn football legend Don Scott pointed out, men don’t take the same serious attitude to our health problems that women generally do.
The scariest moment for me before my operation was waiting for my daughter Rachael’s examination results to come back from my cardiologist. She was clear, reflecting the fact that heredity heart disease is largely passed on through males, father to son, not father to daughter. In saying that, if she has a son it could be passed on to him through her….” 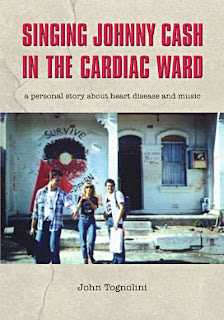 About the photo on the front cover


Russell Crowe, Amanda Dole and myself outside Radio Redfern on May Day 1989. Russell had just performed a few songs on my show, Radio Solidarity. In 1988, Radio Skid Row was evicted from our studios in the basement floor of Sydney University’s Wenthworth Building. We were taken in for eighteen months by the Aborigines/Kooris at Radio Redfern, who now broadcast across Sydney through Koori Radio, until we built and opened the Radio Skid Row studios in Marrickville in 1990. Photo by Frances Kelly.