"Defend Our Rights at Work, Tear up all of Work Choices!" Socialist Alliance 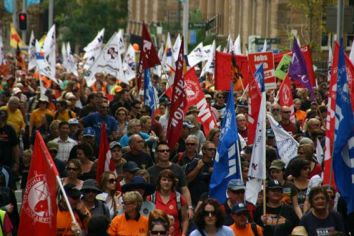 The campaign against Work Choices has been strong enough to force Howard to dump a hated brand name and accept a very feeble “fairness” test for individual contracts. But the campaign has been too weak to stop the federal ALP from keeping a lot of Work Choices’ anti-worker approach. Kevin Rudd and Julia Gillard’s policy maintains extreme restrictions on the right to strike and bans pattern bargaining and strike pay. It takes years to “phase out” Australian Workplace Agreements and the Australian Building and Construction Commission. It’s a sick joke to say Rudd and Gillard have “torn up” Work Choices.

For example, Rudd told the National Press Club on April 17:

Unless changed Labor’s restrictions on the right to strike will be so harsh that the strikes in the campaign against Work Choices would be themselves illegal! As Julia Gillard told the ABC on April 27: “That wouldn't be protected industrial action.”

The Socialist Alliance says that the trade union movement must force the ALP to remove these savage restrictions on the right to strike and the other rights at work that Howard has stolen.

Why is the right to strike so important? Because it is the basic guarantee of all the other rights that working people have won.

This is why the International Labour Organisation says that “the right to strike is one of the essential means available to workers and their organisations for the promotion and protection of their economic and social interests.” It’s also why the ILO criticised the Howard government’s 1996 Workplace Relations Act for being “contrary to the principles of freedom of association on the right to strike”.

Some unionists argue that since there has only ever been a very limited right to strike in Australian law, the ALP’s anti-strike policy isn’t important. This is wrong: The ALP policy will carry heavy penalties against “illegal” strikes, restricting the ability of unions to defend their members.

It will make it easier for a Rudd-Gillard government to repeat anti-union attacks like the Hawke-Keating government’s deregistration of the Builders Labourers Federation (1986) and its near-destruction of the Australian Federation of Air Pilots (1989).

If the ALP doesn’t change its position it’s not difficult to imagine what life could be like under Rudd and Gillard:

• It would be illegal for workers to strike against a company like James Hardie that was poisoning them at work;

• It would be legal for an employer who had decided to “offshore” work to lock out his employees, but illegal for the workers to strike in their own defence, or call on other workers to take supporting action in solidarity;

• It would be illegal for workers to strike against bosses trying employ cheaper, non-union, labour;

• It would be illegal to conduct a strike like the 1976 general strike against the Fraser government’s destruction of Medibank; and

So far the trade unions and the ACTU have been far too tight-lipped about the ALP’s attack on worker and union rights. This must stop. The leaders of our unions must be forced to speak out against all attacks on our rights at work.