Mark Steel: All aboard the London Eye, claimants! 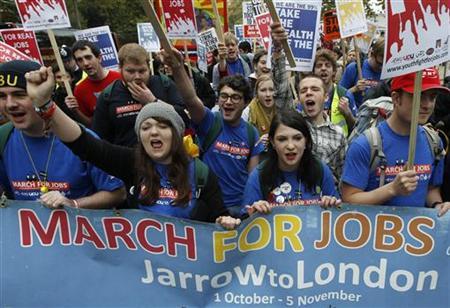 "You might as well say that some people are exploiting the NHS by being in intensive care."


We've come to that point in the lifetime of every Tory government when we're invited to scream about people on benefits. Some people enjoy this activity all the time, but at the moment it's like New Year's Eve for drinking, a time when if you're not doing it to excess, you get sneered at for not taking part in the fun.

So everyone has to tell a story they've heard, such as, "One lot, they haven't worked for 25 years, went down the benefit office, said they needed an aircraft carrier. They filled in a form and the next day it was delivered. Then they sent it back as they didn't like the colour."

Almost every newspaper and minister's interview is packed with stories like this, to justify capping benefits so they can "encourage" claimants back to work. This assumes that the reason unemployment goes up is there's a surge in people deciding not to work. It's true that this seems to have happened at exactly the same time as a global recession but this is probably a coincidence.

So the Government has chosen the amount at which a family's benefits must be capped as £26,000, because no one should be allowed to claim more than the average wage. This would be fair if the way benefit payments were calculated is that you went for an interview, in which you said how much you fancied spending this year and they gave it to you. But the 67,000 households who receive this sum do so because it matches their circumstances. That's why a family of five can claim more than a single person who lives with their parents.

You might as well say that some people exploit the NHS by claiming for dozens of hospital appointments, chemotherapy and nights in intensive care, so we should put a cap on how much they can take, to encourage them to get better. Also, most of this £26,000 doesn't go to claimants, it goes straight to landlords as rent, which could explain why over half of the families who receive this amount are in London, where rents are highest. Or maybe this is another coincidence, and people claim more there because there's so much more to do, such as spend all day going round and round the London Eye and claiming the cost as mobility allowance.

The greed here is from the landlords, who in London can charge £1,000 a month for a squalid two-bedroom flat, knowing it will get paid directly by welfare, and the best bit for them is the people who never see it are the ones who get blamed for swiping it.

So maybe the Government's complaint is that people on benefits aren't greedy enough. Instead of £26,000, they should claim £2m, put the housing benefit in their wife's name in an account in the Cayman Islands, and instead of a cap, the Government will urge restraint and ask them to think twice before claiming a bus pass as well.
Posted by John/Togs Tognolini at Monday, February 06, 2012