Mark Steel: How to get efficient or die trying 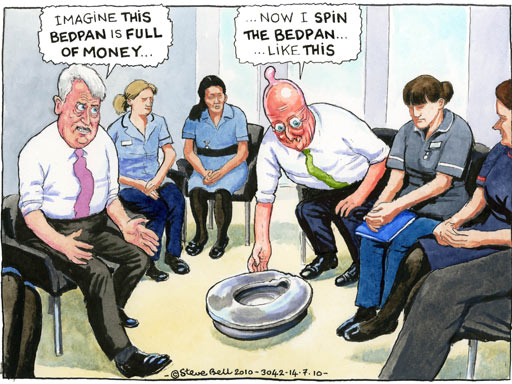 If hospitals were converted into flats, we could enjoy an efficient health service
The proposed Health Service reforms can seem complicated, but luckily one official has tried to explain the idea behind them simply. Mark Spencer, the medical director for the NHS in north-west London, yesterday described his area, saying: "We have more hospitals per head of population, more hospital beds per head of population, and travel time to your local hospital is much shorter than anywhere else in the country. And that's an inefficient system."

He must be so ashamed. Every night he must be told, "I'm afraid we saved three more lives today, Sir", and scream "Oh, for Christ's sake, that's MORE money down the plughole."

Maybe he stands in the cardiac unit muttering "Oh, no, another heart attack patient's pulling through. We save a fortune when they cark it – this bastard's going to need a bed for a fortnight now."

Every time he sees an ambulance on the road it must break his heart to see it inefficiently ferrying road crash victims, when it could be customised by engineers from McLaren, covered in logos for Vodafone and entered in the Brazilian Grand Prix.

Luckily, Mark Spencer seems determined to correct this, saying that: "Almost certainly hospitals will have to close." When he sees a film made for Comic Relief, that says: "In this area of Sudan, there's just one doctor for two million people and, when needed, he's often 200 miles away", he must think: "Why can't WE be like that? They waste hardly any money at all. If I was their manager, I'd only have to sack that one doctor and it would be perfect."

As he assesses each hospital, it must occur to him that the WH Smith near the reception area makes a profit, as do the florists and the car park, but the medical wing consistently loses money hand over fist. And the most inefficient part of all is the intensive care unit, where some of these parasites don't even pay £2 a night to watch the bedside television since they're in a coma.

So if the shops could stay, while the bits to do with broken legs and cancer and that sort of thing were sold off to be converted into flats, we could finally enjoy a health service that was efficient.

This is the sort of problem the reforms are trying to address. The only problem is, as it was noted on the report that quoted Mark Spencer, closing hospitals is "difficult to sell politically". So rather than talk about it as solving inefficiency, he should boast that the reforms and closures are part of a scheme to promote "patient choice". At the moment, you have no option but to have your operation carried out by a surgeon. But in the new system, without the inefficiency of a nearby hospital, you'll be free to choose from whichever profession you like to take out your gallstones; a librarian perhaps, or maybe a professional wrestler, or whoever passes by as you lie on the road in agony, efficiently.