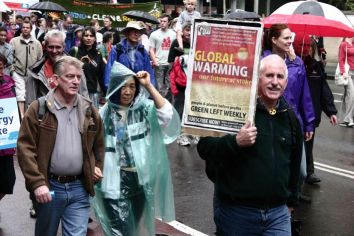 “I’m just, I’m a little concerned with all this hysteria over this greenhouse gases and the environment, that the Liberal Party is not selling your message the way you sold it now to Leon, and that it’s not getting through to the average man in the street” — this is what “Emile”, an “unashamed supporter” of Prime Minister John Howard, had to say to the PM on November 2, during Leon Byner’s talkback show on Adelaide’s Radio 5AA.

It is little wonder that Howard’s having trouble selling his message: his mantras of “clean coal” and a nuke-power-filled future for Australia as the solutions to climate change, and his government’s refusal to ratify the Kyoto Protocol, seem to have found little resonance with the growing majority concerned about global warming.

The October 30 release of the Stern Review on the Economics of Climate Change — a British government-commissioned report — has helped increase the pressure on Australia and its fellow Kyoto renegade, the United States, and keep the threat posed by the greenhouse effect on the front pages of at least a section of the corporate press.

The review, carried out by Sir Nicholas Stern, head of Britain’s Government Economic Service and a former World Bank chief economist, warns of a planetary catastrophe — melting ice sheets, rising sea levels, desertification, extreme weather and possibly a new ice age — if nothing is done about the extraordinary build-up of greenhouse gases. It describes a possible humanitarian disaster, with some 200 million refugees, and says the world’s poor will pay the greatest price.

It argues: “An overwhelming body of scientific evidence now clearly indicates that climate change is a serious and urgent issue. The Earth’s climate is rapidly changing, mainly as a result of increases in greenhouse gases caused by human activities.”

“Most climate models”, the report states, “show that a doubling of pre-industrial levels of greenhouse gases is very likely to commit the Earth to a rise of between 2-5°C in global mean temperatures. This level of greenhouse gases will probably be reached between 2030 and 2060. A warming of 5°C on a global scale would be far outside the experience of human civilisation and comparable to the difference between temperatures during the last ice age and today. Several new studies suggest up to a 20% chance that warming could be greater than 5°C …” It adds that global warming itself could trigger a positive feedback loop by triggering the release of further greenhouse gases.

None of this, of course, is news.

Stern’s report doesn’t reveal a growing scientific consensus on the dangers posed by global warming — because scientists, with the exception of a handful of industry-funded professional “sceptics” and the odd crank, have long agreed on the threat of climate change.

What it does reveal is the growing concern among the acolytes of neoliberalism who for decades worshipped at the altar of “market solutions” to global warming or dismissed its existence, or significance, outright. Unfortunately, his report offers more of the same “free-market friendly” (non) solutions.

Stern’s report is couched in a framework of “pay now or pay later — with interest”. As the report’s executive summary puts it: “The benefits of strong, early action on climate change outweigh the costs.” Stern writes that unless there is substantial change, climate change could trigger an economic crisis worse than the 1930s depression, which could shrink the global economy by 20% and cost US$9 trillion.

According to the report: “The evidence shows that ignoring climate change will eventually damage economic growth. Our actions over the coming decades could create risks of major disruption to economic and social activity, later in this century and in the next, on a scale similar to those associated with the great wars and economic depression of the first half of the 20th century. And it will be difficult or impossible to reverse these changes.”

However, the review argues, “Tackling climate change is a pro-growth strategy for the longer term, and it can be done in a way that does not cap the aspirations for growth of rich or poor countries. The earlier effective action is taken, the less costly it will be.” The Stern review is just the latest attempt to reconcile the irreconcilable: environmental sustainability with profits-first, capitalist economic growth.

Not surprisingly, this “silver lining” message has grabbed the attention of governments, business and the corporate media.

This, however, is the central contradiction of Stern’s report. On one hand it argues for the establishment of a “carbon price”, either “explicitly through tax or trading, or implicitly through regulation” as a key step towards halting global warming. On the other it acknowledges that climate change represents “the greatest example of market failure we have ever seen”.

An example of the flawed nature of the review’s market-friendly solutions to global warming is the European Union’s emissions-trading scheme. The report argues that “In practice, tradable quota systems — such as the EU’s emissions-trading scheme — may be the most straightforward way of establishing a common price signal across countries”. It notes that the ETS “is now the centrepiece of European efforts to cut emissions”.

This contradiction between the threats global warming poses canvassed by the report and the report’s “solutions” mean that its prescriptions are akin to using petrol to try to put out a fire.

Furthermore, responding to the Stern review’s release, Ethan Green from Rising Tide North America noted: “Although climate scientists are in nearly unanimous agreement that atmospheric levels of carbon dioxide must be limited to no more than 450 parts per million in order to avoid catastrophic climate chaos, the new UK report calls for CO2 emissions to be stabilized at the much higher rate of 500 to 550 ppm.”

He explained that this “means the core assumptions of the Stern Report, plus its policy recommendations, are seriously flawed”. “Based on this report, the UK today is declaring that it will advocate global cuts in carbon dioxide emissions of 30 per cent by 2020 and of 60% by 2050. While realising even those minimal cuts would represent great progress from the world’s current unsustainable business-as-usual path, clearly we need much more drastic reductions in order to prevent climate disaster.”

The Stern report’s recommended emission cuts are at odds with the findings of a report from the University of Manchester’s Tyndall Centre for Climate Change Research, according to Rising Tide: “[The Tyndall report] concluded that a 90% cut in greenhouse gas emissions is needed by 2050.”

Rising Tide also slammed the Stern review’s advocacy of emissions trading, noting: “While the World Bank estimates the value of the global carbon market nearly doubled from [US]$11 billion in 2005 to $21.5 billion in 2006, there was no equivalent global increase in carbon emission reductions. In fact … as the carbon market has soared, global greenhouse gas emissions have continued to rise — a stark indication that a more pragmatic and direct approach to cutting emissions is urgently needed.”

That the Stern report has helped propel climate change to the front pages of the Australian corporate press is indeed welcome. It has helped expose once again the backwards stance of the federal Coalition government — Howard responded to a journalist’s question about the review on November 2 by saying “Whether the doomsday scenarios painted in the Stern report are right or wrong I don’t think anybody can assert with great confidence” — and will add to the pressure for the government to ratify the Kyoto Protocol.

But, in the final analysis, the Stern review suffers a fatal flaw by trying to find ways to halt a climate catastrophe that are generally compatible with “business as usual” for capitalist corporations. Ultimately what is needed is not Stern’s business-friendly partial solutions, though some of them might represent a small step forward, but radical social and economic changes to tackle what the report acknowledges is an “urgent” problem. This won’t come about through giving the big end of town dubious incentives to change its ways but through building an environment movement capable of forcing through the changes that need to be made to halt global warming and preserve human life.


Tens of thousands rally for action on global warming

Large rallies were held around Australia on November 4 as part of an international day of action to protest government inaction on climate change. Organisers of the “Walk against warming” estimated that the number of people who participated was up to: 47,000 in Sydney, 30,000 in Melbourne, 5000 in Hobart, 3000 in Canberra and Perth, 1500 in Brisbane, 1000 in Adelaide and Wollongong, 800 in Newcastle and 300 in Cairns.